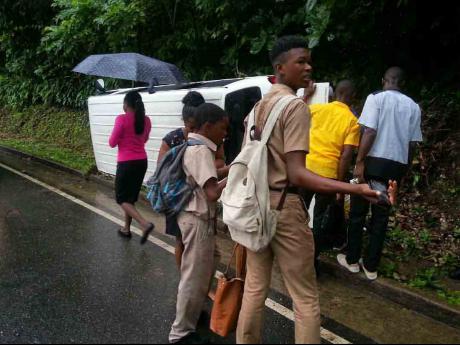 At least a dozen students narrowly escaped serious injuries when the bus they were travelling in overturned in the vicinity of Little Spring Gardens near Hope Bay in Portland, this morning.

The Toyota Hiace public passenger vehicle, which plies the Annotto Bay to Port Antonio route, was heading towards the parish capital, Port Antonio, shortly after 7 o’clock, when the driver reportedly lost control of the vehicle during heavy rainfall.

According to an eyewitness, the mini bus swerved to the right hitting an embankment and overturned, causing screams from passengers, who were trapped inside.

Some students managed to climb through windows to safety, while others were assisted by residents who rushed to the scene of the accident.

One man was pinned down inside the mini bus but was later removed and rushed to hospital, where he is undergoing treatment.

His injuries are considered to be serious, but not life threatening.