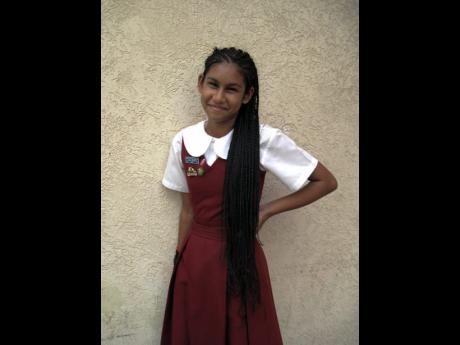 Jehovah's Witnesses are often misunderstood because of their perceptions about certain aspects of life, their belief systems, and how they choose to worship. But in truth and in fact, they are normal beings with a slightly different perception from what is considered mainstream.
Thirteen-year-old Neena Williams attends West May Pen Kingdom Hall and was raised in the truth.
"We are Jehovah's Witnesses, but if asked if I'm a Christian, the answer is yes. I've been a Witness since I was two, but I got baptised in 2014. Before being baptised, I had to take something like an exam, where I reviewed some questions. I have a book with the questions, and after going through them, I realised I was comfortable with the knowledge I have of the truth as I understood it, and so I decided to get baptised." She told Family and Religion that she wasn't influenced by her parents or anyone else to take the decision.
"There is no doubt in my mind that what I'm learning is wrong. There has never been a topic that I have to question, and if I don't understand something, I can always go in search of answers for a better understanding," she said, adding that there is a Jehovah's Witnesses website where she can go for further readings in the truth.
"If I wanted to, I could have left the truth, but if you know something to be true and you believe it with all your heart, why would you want to depart from it? I don't think I will leave the Witnesses at any time to go in search of any other truth," Neena said convincingly.
"She says the Witnesses have a reasoning book, which speaks to many of the regular everyday topics that they may encounter, and she uses the Bible to further cement the understanding of the teachings of the reasoning book. "We use the King James Version of the Bible, but were confused with the 'Thee' and 'Thou', so we changed it into a modern version, and that is much easier to understand and grasp.


She said: "If you believe in something and you know it's real, you will want to share it with others," and it's for this reason that she sometimes witnesses to her peers at the Glenmuir High School. "I don't feel like the odd one out when I'm at school because my peers understand me," she said. They are sometimes captivated by her style of reasoning, her beliefs, and the way she understands the truth.
"We don't celebrate birthdays or holidays, and based on my Bible knowledge, there are certain things I know how to abstain from. With the standards that I set for myself, if I'm in an environment that goes against my belief, I know how to block it out."
She participates in co-curricular activities and is an active member of the chess, science, and art clubs.
Neena shared that she wants to pursue one of or all three of her career paths at some point in her life. " want to become a veterinarian, a teacher, or a paediatrician. I also want to go into full-time ministry after I make some money because it is very important to witness the truth to others."
Her favourite pastime is writing songs, and already, she has compiled a catalogue of 15. She also likes to read and browse the Internet and absolutely enjoys family time with her mother. She attends Kingdom Hall twice per week, and on Saturdays, she goes out for service, where she witnesses to persons.
familyandreligion@gleanerjm.com