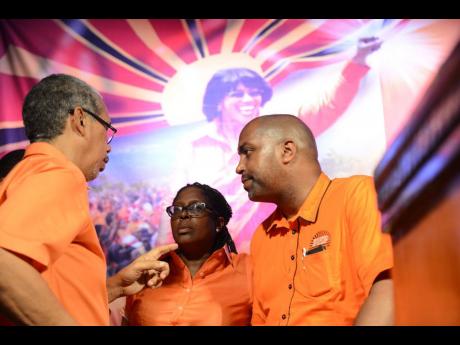 Still smarting from its surprise defeat in the recent general election, the People's National Party (PNP) will continue to review the factors behind its loss and attempt to plot a way forward when Comrades meet in downtown Kingston today.

But there are fears being whispered quietly within the PNP that today's meeting, which has been dubbed 'Comrades Grassroot Reasonings', could bust open festering wounds which have been evident since the party's defeat.

Today's session is being held under the themes, 'The People's National Party belongs to all of us' and 'Rethinking, Renewal, Rejuvenation', and is being organised by the party's New Foundations Group in association with New Foundations 95.

Both groups are stationed in the party's powerful Region Three, with the party's underpressure General Secretary Paul Burke and his wife Angela being major players in them.

Paul is being pressured to resign as general secretary for his role in the party's defeat, while Angela is expected to face a serious fight to retain her post as one of the party's four vice-presidents at its next annual conference.

"This could be an effort by some people to shore up their base under the guise of revitalising the party," claimed one Comrade who asked not to be named.

But Brown Burke scoffed at this claim as she told The Sunday Gleaner that the only motive is to continue the needed discussions.

"The election was about 'people's power' and the PNP has always encouraged discussions and arguments," said Brown Burke.

"We don't even have to agree but we have to discuss the issues openly, and at the end agree on a way forward," added Brown Burke, as she noted that similar 'reasonings' are to be held in other parishes after today's session at the Jamaica Conference Centre.

The organisers have also said constructive criticisms will be encouraged, no negativity will be tolerated, and disrespectful comments will not be tolerated.

"Many Comrades have pre-registered and expectations are high in anticipation of an exciting and successful inaugural Comrades Grassroot Reasonings, where the voice of the party masses are expected to dominate in charting the future of the PNP," said the groups in a release yesterday.