Single mother determined not to give up 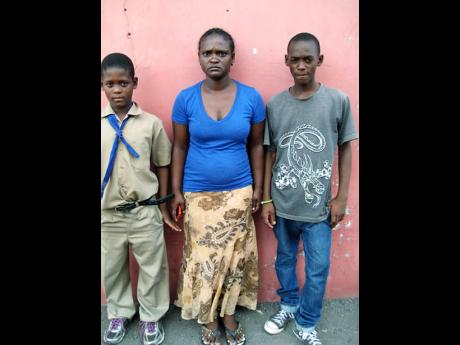 Keisha Ramdass is a single mother caring for two boys on her own. The 33-year-old woman lives in Sevens Heights, Clarendon, with her children in a house where she says she is 'kotching'. The family fell on hard times a few years ago when the house she shared with her mother was burned down in during a flare up of violence in the community.

"I stood outside watching helplessly as the house burn down with my mother inside: we couldn't save her, we didn't save anything," she said adding that she has received no help since then.

She told Family and Religion: "We lost everything in the fire and, since then, we been living off the likkle hustlings I do, but it's not enough and I can't manage. The boys are getting older and are looking to me to provide for them, but I can hardly even afford food. Sometimes mi feel very uncomfortable in the situation, but mi can't do no better. We sleep on cardboard at nights and it's very uncomfortable."

Omar Phillips is nine years old and attends Effortville Primary, while his elder brother, Javaun Brown, is a student at the Osborne Store Primary and Junior High. Omar is sometimes teased about his less-than-ideal home situation by his peers, but his mother does her best to encourage him to focus on his studies because life will get better even though she is unsure of when that will be.

"It rough 'cause ah me alone ah mother and father fi dem, but mi naa give up. Sometimes I have to go out to seek day's work - sometimes I get it, sometimes I don't. When I work a little money, I buy small stuff like soap powder and tissue and walk and sell on the road. Mi affi go out there and try hustle so we can eat a food, sometimes me sell, sometimes me no sell," she said as the evidence of hard life mirrored her face.

Miss Ramdass manages to send her children to school out of the little hustling, but is adamant she will not give up because she is determined to see her children past the worse.

"Mi a try mi best fi dem because I don't want them to become a problem to society," she said.

"Life hard till mi can't even afford a bed, ah cardboard me and mi kids dem sleep on ah night time. Sometimes we eat dumpling and butter, other times a just so-so rice wid likkle water and give thanks and satisfy and go we bed."

"No matter how hard it is, I always try my best to send them to school every day and they are doing well so far. That gives me the extra motivation to put out my all for them, but I just need a little push start because I am willing to work to support my kids."

Anyone willing to assist Keisha Ramdass and her children can contact her at 8583926.