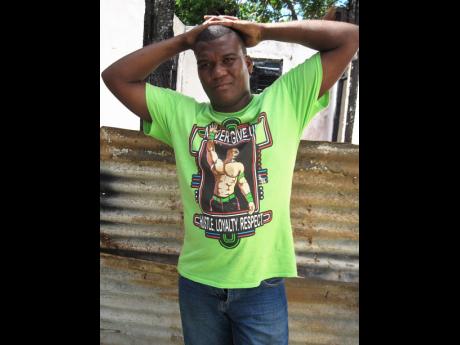 At 30 years old, Ricardo Stewart didn't expect to be living life on the edge, owning a single suit of clothes and begging for food.

The quiet, soft-spoken resident of Effortville in Clarendon said just two weeks after returning home from the overseas work programme, his house was burnt to the shell. "I was in bed when my wife wake me up, say di house on fire. We couldn't save nothing but we self," he said of the four-bedroom structure that he called home.

A restaurant attached to the house also went up in flames, taking with it all his cooking utensils, stove and food.

He suspects arson is the cause of the fire because, according to him, the fire personnel were not able to determine the origin of the fire.

A seasonal farm worker employed to the overseas work programme, Stewart says each year upon his return to Jamaica, he "hustles" daily from the restaurant.

"I sell to everyone in the community, including students Effortville Primary. The food I sell is at a cheaper price than other restaurants, because I know most times people, including the children, cannot afford to buy a big lunch. So I sell them for as little as $100, and sometimes give away for free to those in genuine need," he said.

Stewart said that selling food at a reduced cost isn't profitable, but he does it out of the goodness of his heart, because he sees and understands the need for the service he provides. "I can't save from it, its just a hand-to-mouth thing, but it keeps me going," he told Rural Xpress.

This loss has affected him immensely, especially because he lost all his papers in the fire. "Where I'm at now is not where I want to be. I'm very uncomfortable in the living situation a just kotch mi kotch right now and it rough pan mi. A just di mercy a God a keep me right now," he told Rural Xpress as he tried to smile to hide the pain.

Stewart says he is expecting to be recalled to join the work programme this year, but suspects he will not make it because he has lost his passport and supporting paperwork needed to return to the programme.

With hands on his head, he went through the burnt-out building in bewilderment, pondering his next move. "Well, I plan to fix up the house, but I need a lot of help because I don't even have the first dollar to start. I tried a little days' work, but stop because I wasn't getting paid."

"This was my worst Christmas so far. I live in the one suit of clothes day in, day out. I'm seeking a place to rent to restart the cookshop, but not even that I can afford, because all my money burn up in the house; and I don't have a pot, much less a spoon, right now. Mi desperately need a push-start. I'm not an idler and I don't like to sit around and beg, I am willing to work for my own," he bemoaned.