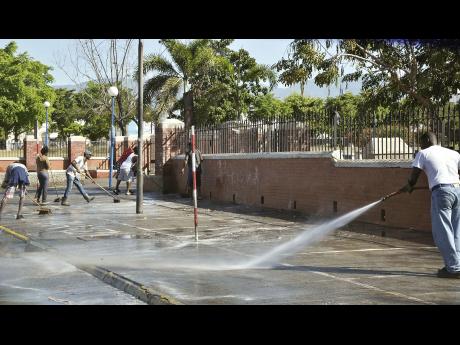 Norman Grindley
Workmen carrying out the almost fortnightly cleaning of the walls and sidewalk around the St William Grant park in downtown Kingston last Sunday. 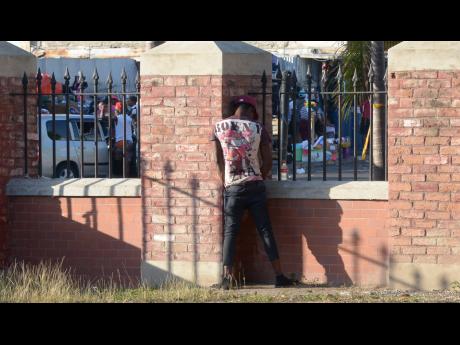 Gladstone Taylor
A passer-by stops to urinate on the wall of the St William Grant Park in downtown Kingston. 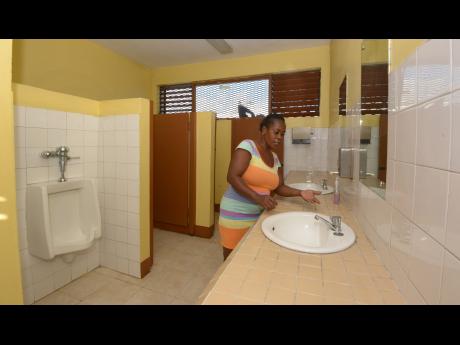 Gladstone Taylor
An attendant inside one of the well-maintained bathrooms at the St William Grant Park last week.
1
2
3

The Kingston and St Andrew Parish Council (KSAC) is spending more than $300,000 each month to wash and disinfect sections of the St William Grant Park left stink by persons, mainly men, who use the walls of the park as their personal urinals.

"We are trying to do it at least twice per month. Right now it costs over $300,000 a month. That includes payment for the trucks, the material, and also labour," said Alrick Francis, city inspector at the KSAC.

"The washing is usually done either late at nights or early in the morning to ensure that persons are not put out of their way," added Francis.

He lamented that even after a $121 million upgrade by the Urban Development Corporation (UDC) in 2010, members of the public continue to urinate on and around the perimeter fence of the park, which has a well-maintained bathroom.

This has been a problem for many years, and park manager Marcia King is among those pointing the finger at one particular group of offenders.

"Most of the persons doing it are the (Jamaica Urban Transit Company) bus drivers. Other people do it, too, but mainly, it is the drivers. You notice how they park the buses back-to-back? What they do is just go around it," said King.

She said that higglers, vendors, and general passers-by are also included among those who pee on the park regularly.

According to King, the matter has been brought to the attention of the KSAC, and she was told that the municipal body had initiated dialogue with the JUTC about it but nothing had changed.

"Even today (last Wednesday), I was coming through and I see a man and him say, 'Woo! It a come dung pon me', and him underpants actually draw down," recalled King.

"I said to him, 'See the bathroom there open up'. Is Sunday. We washed the park, and my God!" added King.

Our news team also saw a vendor of eyeglasses unzip his pants metres away from the bathroom and urinate just inside the park's western gate.

"Fi tell you the truth - cause the whole a we a big man, zeen - me nuh pee-pee a daytime, and me nuh pee pee a night-time, but true it come down pon me, fambily," said the vendor.

"Real thing, is the bathroom me come to go but me bladder weak, so me have to stop here. But me know seh me nuffi do it. Me know better," added the vendor, who rinsed his hands with water he had with him.

There are at least four tiled, freshly painted and regularly cleaned bathrooms at the park, each monitored by female attendants juggling morning and evening shifts.

The rest rooms are open from 6 a.m., and members of the public are provided toilet tissue and asked to make a $30 contribution with each use. The money is collected at the end of the week and used to purchase cleaning agents.

"A lot of the people don't want to pay the money, and the JUTC driver them worse. Most of dem, because dem don't want to pay, just urinate outside on the wall," charged Keisha, who monitors one of the rest rooms closest to the northern perimeter fence, where the JUTC buses are often parked, awaiting deployment.

When contacted last week, Reginald Allen, marketing and communications manager at the JUTC, said the company was not aware of the staff using the walls of the park as a urinal and the state agency would condemn any such behaviour.

"The JUTC has a major office facility at East Parade, which is less than 100 metres from the farthest point of the north wall of St William Grant Park. The office is open daily from 5 a.m. to 8:30 p.m., with bathroom facilities for the convenience of all the staff operating in the Parade area," said Allen.

"The drivers all leave depots with full bathroom facilities between 4 and 5 a.m., with their arrival and positioning of the buses at Parade normally coinciding with the opening of the East Parade office," added Allen.