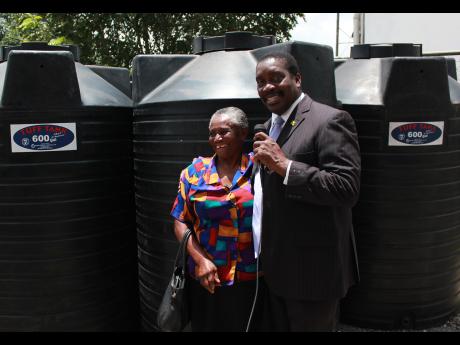 Teachers and representatives from 12 basic and primary schools in western St Mary received 600-gallon water tanks yesterday, thanks to an education-focused initiative spearheaded by local politicians.

According to the Member of Parliament (MP) Robert Montague, the donation would ensure that schools in some of the parish's most rural communities operate and function more efficiently.

Speaking from his constituency office in Gayle, he told The Gleaner: "Many schools don't have a regular water supply, and sometimes they have to close during the school time and deprive the children of a day or two of education.

"And this happens very often because the water network doesn't reach all the schools, so it's very important that we have sufficient storage capacity to keep the children in school so they can build a firm foundation for the future.

"Education is the poor man's ladder to success and helps with the whole matter of conflict resolution. We have too many of our people in conflicts they don't know how to resolve. But the more educated they are, the less we will see of domestic violence and conflicts being resolved by the knife or the gun."

Mary Sewell of Derry Basic School said the tanks would make a difference for the institutions because "when water is short, this old lady has to take the gallon bottles and walk to the spring to get water to cook lunch for the children, so I'm feeling very happy and proud right now."