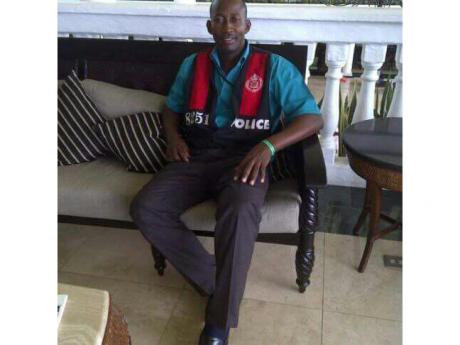 MANDEVILLE , Manchester:
It's been a night of grief for the Manchester police and members of affiliated ‎community groups battling to come to terms with the murder of corporal Melvin Smith.

The corporal, in his uniform, was shot dead as he tried to accost a robber in the vicinity of the Mother's restaurant along Manchester Road in the parish capital sometime after 8 o'clock.

"He was like my son," said Sergent Verona Johnson, Smith's former supervisor.

"My home was his home. Everybody is feeling it".

Smith, 38, who was attached to the Community Safety and Security Branch, was shot at least three times as he tried to accost the alleged robber.

He managed to fire one shot, but his attacker fled.

The attacker did not take the policeman's weapon.

Smith was rushed to the Mandeville Regional Hospital where he succumbed to his injuries.

He was known and admired by individuals in and out of the parish for his charismatic personality and his willingness to work with communities for the success of their initiatives.

On social media, there is an outpouring of love for the slain policeman, with some people hailing him as an unsung hero who gave selflessly to the cause of residents in every community he visited.