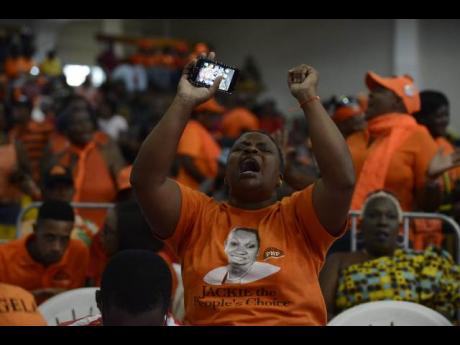 Ian Allen
A People's National Party (PNP) supporter chants this morning as the public session of the party's 80th conference got under way at the National Arena in Kingston.

People's National Party (PNP) supporters are still on a high following yesterday's vice-presidential election as they get ready for the public session of the party's 80th annual conference today.

The Comrades, who are cramming themselves into the National Arena in St Andrew at this hour, told our news team that they are still celebrating a well fought face.

"Me did nervous! But today we nice. Everything in a bottle. I just love this party, PNP nice," Sharon, who hails from Central Kingston, said as she made her way inside the National Arena.

However, some supporters said while they did not fully agree with the results of yesterday's election, they accepted the results.

"To tell the truth. Me feel that Angela Brown Burke should have been somewhere there. Me vex 'bout that part but the others can gwan," a PNP supporter from North West St Ann told The Gleaner.

They mentioned that they were looking forward to speeches from newly minted vice-president Crawford and party leader Dr Peter Phillips.

Phillips had said the PNP would be making a covenant with the people as a part of its public session today.