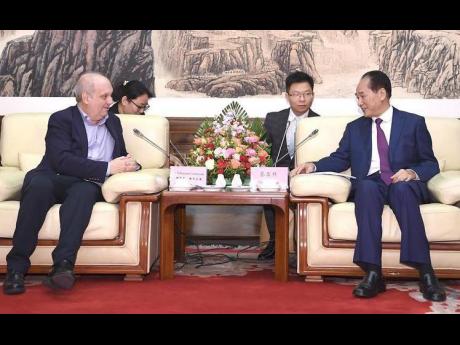 Contributed
Hernan Lombardi (left), secretary of the Federal System of Media and Public Content in Argentina, in discussion with Cai Mingzhao (right), president of Xinhua News Agency. The two made presentations at the just concluded 2018 China-Latin America and the Caribbean Media Forum in Buenos Aires, Argentina.

With artificial intelligence emerging as the way of the future in media and China emerging as the leading exponent in this exciting new era in digital technology, media entities in the Latin America and the Caribbean region are being urged to join China in making it a shared experience.

Hernan Lombardi, secretary of the Federal System of Media and Public Content in Argentina, who was one of the participants in the just-concluded 2018 China-Latin America and the Caribbean Media Forum in Buenos Aires, Argentina, said media practitioners in the region would benefit greatly from accepting China’s offer for training and other assistance.

“We must be pragmatic in seeking to create common ground. The idea is to work together to build a community of togetherness,” said Lombardi. “We are all passengers on the same boat, and we must strive to grow together.”

Zheng Guangxing, deputy secretary general of China’s Economic Daily, said the new technology on offer, through the use of the latest in digital programming, will enhance the media landscape by helping to make things happen much more quickly as well as open new doors to opportunities for greater cooperation and economic benefits.

“Digital technology will make things happen more quickly,” said Zheng, who argued that if Donald Trump, the United States’ president, should change his attitude in terms of adopting a global perspective, even more doors and more opportunities would open up.

“If you control the digital environment all over the world, you will be able to report from anywhere at any time and quite quickly,” added Zheng as he noted that the advantages in the new digital technology now include converting audio to text, using animation to boost presentations while being able to work quickly and accurately with a modern flair.

“With this technology, we can use our mobile devices to do anything from anywhere. We can edit stories, edit and send photographs and videos, and we can do live streaming from anywhere,” said Zheng.

He pointed out that China used the technology to rave reviews in the 2018 FIFA World Cup in Russia.

“What we used to do in three days, we can now do in three hours,” said Zheng, in reiterating China’s offer to train journalists from Latin America and the Caribbean to maximise the benefits of digital technology while opening the door to understanding and cooperation.

“Artificial intelligence is the new model, and we are willing to share it with you.”

The offer for training was roundly embraced by media entities in the region. According to Alejandro Ramos Esquive, the director general of Mexico’s NOTIMEX, this new and attractive way of delivering news could strengthen the capacity of media organisations in the region to generate revenue.

Jamaica’s Keith Campbell, the CEO of Public Broadcasting Corporation Jamaica, who made a presentation during a segment that looked at ‘Building New China-LAC Media Platforms Based on New-Media Cooperation,’ said that Jamaica could greatly benefit from China’s assistance in the pending transition from analogue to digital technology in broadcasting.