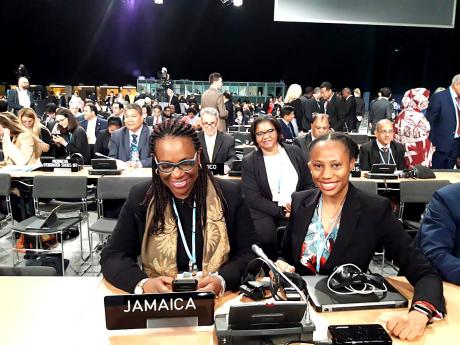 JAMAICA IS to serve a second term on the Bureau of the Conference of the Parties (COP) to the United Nations Framework Convention on Climate Change (UNFCCC).

The Bureau supports the COP Presidency and other bodies for the effective operation of sessions. This will include planning for the next COP (COP 25), to be held toward the end of this year.

Head of Jamaica’s 14-member delegation and Principal Director of the Climate Change Division, UnaMay Gordon, was re-elected to the Bureau as Vice-President on behalf of the Group of Latin America and the Caribbean (GRULAC).

Jamaica fielded a delegation of 14 persons from government, private sector, youth and civil society entities to the recently held COP 24 in Katowice, Poland from 2-15 December, 2018.

The island’s participation was strong in the negotiations for the Paris Agreement Work Programme (PAWP, also known as the “rulebook”), and in side events including sharing of Jamaica’s experience in renewable energy transition, with the Adaptation Fund and process management.

“Our team worked very hard over the time and we are seeing some results,” said Gordon.

Members of the delegation participated in a total of 15 side events over the two weeks, among them:

- “Building Resilience Through Circularity: Circular Economy and SIDS”, an event organised by the Inter-American Development Bank (IDB) to discuss the benefits of a circular economy in the climate change arena;

- “Screening and assessment of CC risks and ID of resilience opportunities”, also organised by the IDB, and for which Jamaica shared perspectives relating to experiences with climate risk management in projects; and

- The Contributor Dialogue for the Adaptation Fund (AF), an opportunity for donors to outline their current contributions to the Fund, and for Jamaica and two other countries to share benefits which have redounded so far from implementing AF projects and programmes.

Jamaica is a member of the Alliance of Small Island Developing States (AOSIS) and negotiates under this umbrella group. At COP 24, held last December, Jamaica served as the AOSIS lead negotiators on adaptation and on carbon markets. As lead negotiators, it was Jamaica’s responsibility to coordinate within AOSIS, and also to ensure that the AOSIS positions were reflected as a part of the Group of 77 (G77) and China and subsequently, the wider decision texts adopted by Parties. Clifford Mahlung was the negotiator on Adaptation.

In addition to the main COP 24 sessions, Jamaica also played an active role on three constituted bodies of the UNFCCC, including the Executive Board of the Clean Development Mechanism (CDM EB); the Executive Committee of the Warsaw International Mechanism (WIM Ex Com); and the Adaptation Committee (AC).

The CDM is a carbon trading regime that was established under the Kyoto Protocol; Jamaica serves as a member of its Executive Board, thereby contributing to its role in supervising its operation, particularly in ensuring that decisions adopted by Parties are actioned.

Similarly, as Vice Chair of the WIM, the country is contributing to the implementation of the WIM on loss and damage which seeks to advance work on slow onset events, non-economic losses, displacement due to climate events, and comprehensive risk management.

On the Adaptation Committee, Jamaica’s membership contributes significantly to its work in promoting the implementation of adaptation action under the Convention and, further to COP24 decisions, the Paris Agreement. Jamaica’s re-election for a second term on the Bureau will ensure its continued participation on all three constituted bodies and should help to extend its reach in the processes going forward.