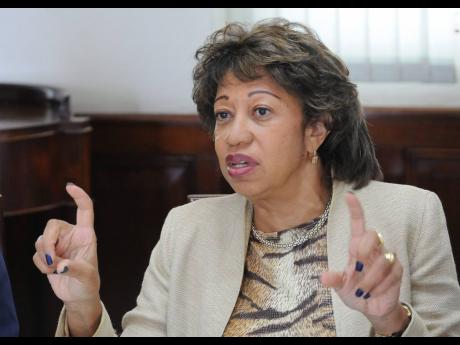 JAMPRO President Diane Edwards last Thursday exposed some of the systemic ongoing hindrances to Jamaica’s agriculture sector which continue to undermine efforts at export substitution, as well as food security and nutrition.

Edwards cited, as an example, the vast gaps between overseas demand and supply for crops such as yam.

Research done by JAMPRO shows that the demand for Jamaica yam in the United States is about US$80 million, Canada about US$27 million and the United Kingdom at US$11 million.

“We can give you a raft of other crops and information on them between RADA (Rural Agricultural Development Authority), MICAF (Ministry of Industry, Commerce, Agriculture and Fisheries) and JAMPRO. We have a lot of information on how to grow products, where to market them and we at JAMPRO put you in touch with importers,” Edwards disclosed.

“It’s not that we’re lacking markets. We have huge opportunities and we’re just not taking advantage of them. We just need to put things together and become a real performance-based agricultural country,” she stressed.

Jamaica’s food import bill stands at about US$900 million with 85 per cent of the food consumed by locals and tourists in the Caribbean region imported, the JAMPRO president pointed out in making the case that market penetration is the key missing ingredient from a national agricultural plan.

She pointed to the US$174 American market for Jamaican black castor oil, which JAMPRO has been integrally involved in promoting, of which there is a demand of US$28 million for the Jamaican product.

“How much of that market do we supply? US$4 million because where does the rest of the US$24 million come from? India, masquerading as Jamaican castor oil.

“We just need to put things together and become a real performance-based agricultural country,” she said.

Edwards’ revelations came during a virtual town hall meeting on ‘COVID-19: Recovery Strategies for Agriculture and Food’ hosted by the Ministry of Industry, Commerce, Agriculture and Fisheries and the Agriculturalist Magazine. Participants were drawn from the diaspora as well as local agriculturalists, input suppliers and other major players in agriculture.

According to Edwards, there are huge untapped opportunities for supplying fresh produce, processed food, vacuum-packed foods, ready-meals, many different ways of presenting produce that Jamaicans in the diaspora love and remember how to consume. However, their children are losing the taste for these foods due to their unavailability.

Failure to expand our orchard crop production was one of the investment challenges in agriculture, identified by the JAMPRO president, who explained that the lack of financing for small farmers was a root cause.

“We have to change the picture for financing in the Jamaican agriculture sector because finance is only available to the very big operations like the JPs, Graces, Caribbean Broilers, etc., which have large successful farms already. How do we bring the small farmers into it?”

The mother-farm concept needs to be expanded beyond chicken rearing which has proven successful in Jamaica, to include a variety of crops, and again the investment agency stands ready to share the benefit of its expertise, according to Edwards.

“JAMPRO has done a five-year agro-business strategy that is really looking at climate-smart agricultural solutions, and some of those mean that we have to use renewable energy to reduce the cost of energy to the farmer who needs to dig wells, who needs to be transporting water through irrigation systems. We need to be looking at how we restructure our agriculture to make it more performance-oriented and market driven.”