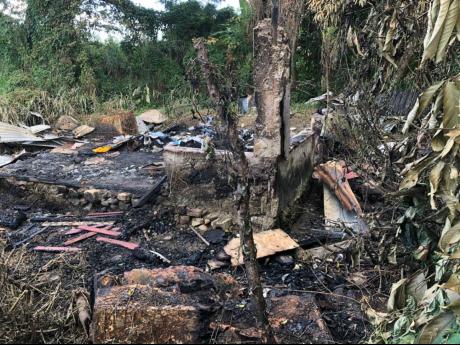 Photo by Gareth Davis
The remains of Ann Marie Livingston’s house which was destroyed by a fire last week.

Four persons, including an eight-year-old girl, who suffered losses in a fire which destroyed their dwelling last Thursday afternoon, are awaiting the findings from a report from the St Mary Fire Department to determine the way forward.

Ann Marie Livingston, who spoke with The Gleaner by telephone Saturday night, pointed out that no one was at home at the time of the fire, which gutted their one-bedroom plywood house, destroying all their earthly possessions.

Livingston, her daughter, an uncle, along with one of her cousins occupied the one-bedroom house. She explained that she provided accommodation to her uncle and cousin, who had nowhere to live as they had fallen on hard times.

“The house was seen on fire round about 2 p.m. Thursday afternoon and no one was home,” she said.

“My eight-year-old daughter, who was coming from school, stopped off at her grandmother, who live close by in the community. Only her uniform which she was wearing was saved. So all she have to wear now is her uniform, socks and school shoes. Wi lose every ting inna di fire, even birth certificate, passport, and money ... so mi really need help fi get back her school tings and to rebuild di house,” Livingston said.

The firefighters who responded to a fire call carried out cooling operations, as upon their arrival on the scene, the building was reduced to ashes.

According to Livingston, since the fire on Thursday, they have so far received mattresses, food items, clothing, water, and other emergency supplies from the Ministry of Labour and Social Security, and also from the office of Member of Parliament Dr Norman Dunn.

And for his part, Dr Dunn said that he delegated, through his office, emergency assistance for the family, including food items, clothing, toiletries, and water to aid in the recovery effort.

“We are awaiting the police and the fire report to determine what caused the fire,” said Dunn.

“Once this is ascertained, then we have to move speedily to provide emergency assistance to those affected by the loss. It is absolutely important to move speedily on this one, especially given the fact that a child is involved. There is definitely a need for myself and all the relevant state agencies to see how best we can assist them to rebuild,” he noted.

A refrigerator, wardrobe, stove, standing fan, two beds, three mattresses, clothing, food items, an electric iron and a television were among the items destroyed by the fire.