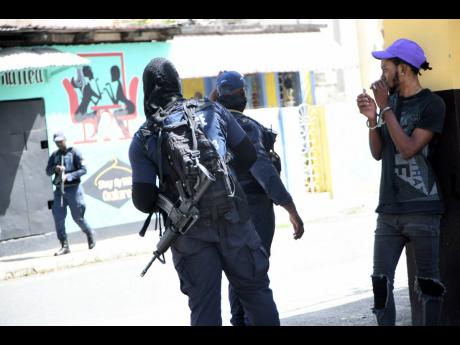 Rudolph Brown
Police arrest a man while patrolling the streets of Arnett Gardens, south St Andrew, after a triple shooting in the community.

Pauline Smikle, the mother of 26-year-old Gregory Llewellyn who has been living with Down’s syndrome, is now faced with the tough decision of whether to continue working or stay home to take care of her disabled son after he was shot on Monday evening in Arnett Gardens, south St Andrew.

The 63-year-old told The Gleaner that she would rather be staying home with her son, especially since his cognitive functions are at the level of a young child, and so he is unable to explain himself in dangerous situations.

“Him deh here the other day and mi always tell him fi lock di gate, and the police dem come and push till the board all bruk it off want to see a who and who down there, and this come happen again,” she said Tuesday, mindful of the context in which they live, lamenting that she does not want to leave him unprotected.

Smikle, who works at a banana chips-producing facility, said she was at work when she got the news.

Llewellyn received a shot to his hip. Smikle said the doctors have informed her that her son may have to be fitted with a colostomy bag, depending on the outcome of the surgery he underwent yesterday. It is possible he may need it permanently.

The police report said Llewellyn was among three persons who were standing along Ninth Street in the community when they were shot around 5:50 Monday evening. Courtney Getten, 50, and Beatrice Fyffe, 58, were both shot in their left legs.

“The shot runs through her foot and come lodge inna my own,” Getten told The Gleaner yesterday in a phone interview. He said around four shots were fired in their direction and noted that the police arrived swiftly on the scene.

Superintendent Michael Phipps, who is in charge of the West Kingston Police Division, said a car that was parked along the road was also damaged.

“In that particular shooting, we have identified two suspects known as ‘Babatundeh’ and ‘Que’. They are being sought in particular to the incident,” he said.

“We believe it was a continuation of a gang feud which has emerged between the Angola and Zimbabwe gangs in the Arnett Gardens area,” he added.