‘There is a place for everybody’

Porus, adjoining communities will not be forgotten despite South Coast Highway/Bypass, says McKenzie 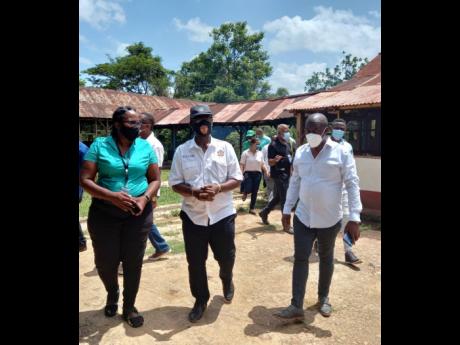 Tamara Bailey
From left: Councillor of the Porus divison Claudia Morant-Baker, Minister of Local Government and Rural Developmemt Desmond McKenzie, and Mayor of Mandeville Donovan Mitchell during a tour of the Porus division recently.

As scores of residents in Porus, Manchester, and surrounding communities continue to ponder the fate of their livelihood with the impending South Coast Highway structured to divert some traffic away from the commerce hub, Minister of Local Government and Rural Development Desmond McKenzie has reassured them that activities in the town will be sustained.

“There is a place for everybody. Government has to be mindful that for a country to move forward in the 21st century, we have to become modernised. Putting in new infrastructure is not going to come at the cost of any one town or community, and I am quite sure that Porus will still maintain what is has, despite what is being put in place. No one is being forced to use the bypass; there will still be vehicular traffic (passing through the area).”

McKenzie, who last Friday toured the South Manchester communities of St Toolies, Hampton Road and Porus, referenced areas such as Faith’s Pen and Old Harbour that have survived the building of a bypass. He added that Porus will receive the help its needs.

Among the issues facing the communities is poor accessibility to potable water.

Councillor for the Porus division, Claudia Morant-Baker, said there are approximately 15 wells in the division, along with natural springs and National Irrigation Sites – which will now have to be further used to ensure each resident has sufficient access to water in their homes.

McKenzie said that arrangements will soon be made for a water shop to be erected in the affected community of St Toolies.

He also added that the sparsely occupied Porus market will be assessed and repurposed, if necessary, for the economic sustainability of the town.

“Here at one of the oldest markets in Jamaica, I must say I am disappointed that something such as this could be allowed to run to ruins. You have about four vendors selling ground products and four butchers, and I understand that this was one of the leading meat markets in the country.”

Having announced the Rural Development Pilot project during his sectoral debate in May, the minister said he will now be adding the Porus area to the list of communities to be assisted with water, road repairs among other elements.

The $650-million programme is aimed at improving the lives and economic well-being of rural areas, and begins in Chambers Pen, Hanover, during the first half of the 2021-2022 fiscal year.