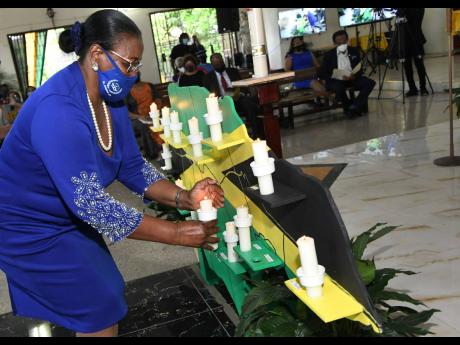 Rudolph Brown/Photographer
Dr Patricia Dunwell, custos of St Andrew, places a candle on the map of Jamaica at the National Chorale of Jamaica’s church service and candlelighting ceremony to honour lives lost during the COVID-19 pandemic. The service took place at St Theresa Roman Catholic Church in Vineyard Town, Kingston, on Wednesday. 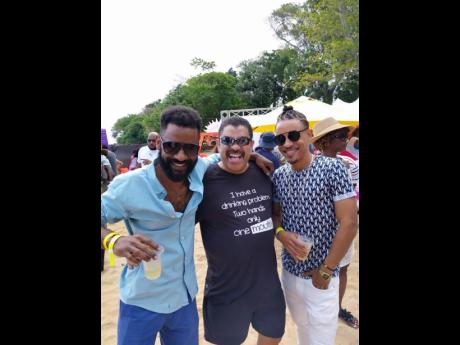 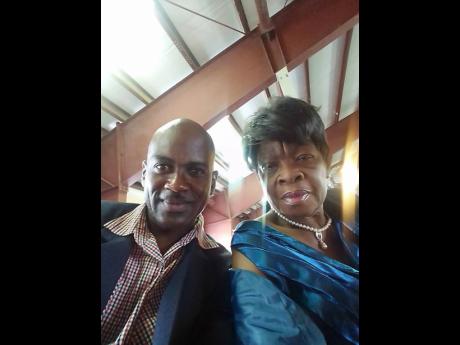 Contributed
Andrew Salmon with his mom Miriam Salmon, who died from COVID-19 in New York in April 2021.
1
2
3

As custodes from Jamaica’s 14 parishes each placed a candle on a woodcarving shaped like Jamaica, Wednesday’s sombre ceremony in honour of casualties of the coronavirus contrasted with the bright national colours and dancing flames signifying life...

As custodes from Jamaica’s 14 parishes each placed a candle on a woodcarving shaped like Jamaica, Wednesday’s sombre ceremony in honour of casualties of the coronavirus contrasted with the bright national colours and dancing flames signifying life, love, and laughter of the lost.

Dr Andrew Salmon understands the huge emotional toll caused by the COVID-19 pandemic, which has killed approximately 4.2 million people globally, including at least 1,211 in Jamaica alone.

Salmon, a Jamaican living in Canada, lost his mother to the virus on his birthday in April 2021.

Miriam Salmon, 78, lived with her 77-year-old husband and three of her four sons in New York City.

Filled with regret, Dr Salmon said that Miriam’s passing continues to haunt him as he had been unable to visit his mother during her final moments because the Trudeau administration had closed the Canada-United States border.

Salmon is still struggling to find the strength to forgive his brothers for their delay in bringing their mother to be tested before her health deteriorated further.

Jamaica is on the cusp of recording 54,000 infections overall.

But Miriam Salmon was more than a mere global statistic.

A mother of six who had been married for 45 years, she had been battling Stage Two cancer, which resulted in the loss of her left breast. She also suffered underlying illnesses such as hypertension and diabetes, which worsened after contracting the virus.

After being admitted to Brookdale University Hospital in Brooklyn, New York, Miriam was diagnosed with Type One respiratory failure, pneumonia, and other complications.

Being a medical doctor, her son, Andrew, said he knew at that point that she would not have much time left to live.

“The equivalent of Mother Teresa without joining the Catholic Church,” said Dr Salmon of his mother, referencing the late Albanian-Indian nun and missionary renowned for her charity.

Having lost the “glue” that held his family together, Dr Salmon has warned fellow Jamaicans to shun the misinformation peddled by anti-vaxxers and roll up their sleeves.

“Go and get reliable information. Ponder what is before you, and then make an informed decision,” he said.

Back in Jamaica, Alex Jackson said that some clients have found it too emotionally painful to return to Ruthven Medical Centre for healthcare since his late father, Dr Lenworth Jackson, passed in October 9, 2020. Others find it hard to walk down the corridor towards the doorway of his former office.

“People have not been back to the doctor since,” said Alex, noting that his father had served “many families of nearly five generations”.

“People come here and bawl still ... just walk through the door and cry. I didn’t know how deeply emotionally connected some of these patients were to him,” he added.

Highlighting that much of his father’s work was done for free, Alex, who co-manages Ruthven Medical Centre, said that they, too, miss his broad smile and big-hearted, jocular spirit.

The tragedy unfolded quickly, but clear signs were missed. Dr Jackson had begun experiencing flu-like symptoms for almost a week.

Quipping that “doctors are their worst patients”, Alex said that his father did not give much attention to his symptoms.

The physician was hospitalised and eventually admitted to the intensive care unit, where he was placed on a ventilator. He died 10 days shy of his 70th birthday.

Dr Jackson, like many COVID-19 casualties, had other complications such as kidney issues and heart disease.

COVID-19 protocols governed by the Disaster Risk Management Act limited funerals to a maximum of 15 attendees, depriving thousands of relatives and well-wishers from partaking in the last rite of passage.

Dealing with death has been particularly difficult in the coronavirus era, said Andrew Jackson, another of Dr Jackson’s sons.

“The coping mechanisms that are typically there in a typical passing aren’t there to the extent that they usually are,” said Andrew during an interview at Ruthven Medical Centre on Wednesday.

“We haven’t just lost a father. So many people have lost a mentor in their life.”

The National Chorale of Jamaica church service at St Theresa sought to salve the emotional wounds caused by COVID-19, with songs, prayers, and scripture readings offered in honour of the bereaved.

Danvers is hopeful that a similar candelight service could be hosted next year highlighting the narrative of tragedy and triumph on the second anniversary of the confirmation of the first COVID-19 case in Jamaica.

With fewer than 10 per cent of Jamaicans fully vaccinated, Danvers is concerned about the third wave of the highly contagious virus, with Delta the most aggressive variant.

Stressing the importance of vaccine compliance, he implored Jamaicans to not “let ignorance be the plight that will stop us from achieving our greatest destiny”.