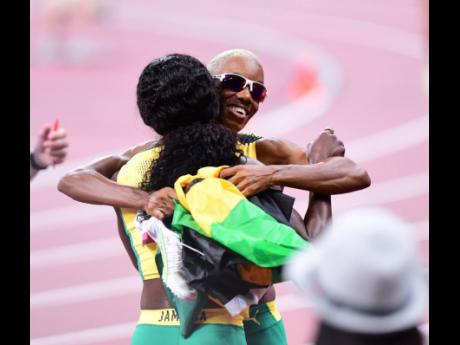 Gladstone Taylor
Shericka Jackson (back to camera) and Candice McLeod embrace as they celebrate their win in the women’s 4x400 metres relay final at the Tokyo 2020 Olympic Games yesterday. 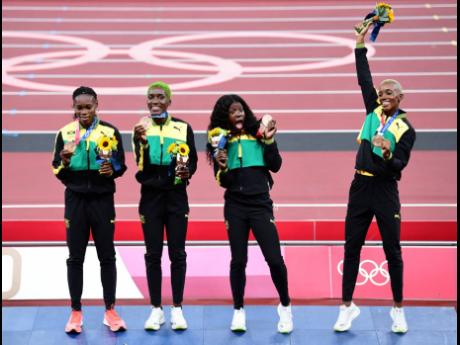 In terms of legacy, Jamaica’s women’s 4x400 metres relay bronze medal at the Tokyo 2020 Olympic Games on Saturday, August 7, was a continuation of a heritage that spans two decades. But, for a couple of ladies on that team, it was also a high point in a lifelong friendship.

Since the 2000 Sydney Olympics, Jamaica’s women have always medalled in the mile relay, winning four silver medals and two bronze over the 21-year period.

That is almost as long as the friendship shared between Jamaica’s third and anchor-leg runners, Shericka Jackson - the 100-metre bronze and 4x100-metre gold medal winner from these Games, and Candice McLeod, the fast-rising 400-metre finalist.

“Honestly, I am just grateful for Candice. I have been there with her since she was running 63 seconds. So, now she is running 49.51, it has been quite a journey for her. She has been working really hard and her hard work is finally paying off,” said Jackson.

The Jamaican team, which was completed by lead-off runner Roneisha McGregor and 400 metres hurdles finalist, Janieve Russell - who actually had the fastest split for the Jamaicans (50.0) - crossed the line in 3:21.24 to finish behind the United States, 3:16.85 and Poland, 3:20.53.

Jackson shared that her friendship with McLeod started 12 years ago at Vere Technical High School and added that sharing the moment with one of her closest friends makes this, her fifth Olympic medal, one of her most cherished.

“I ran on a 4x400 metres relay with my friend, we got a medal together and I am just really grateful,” Jackson beamed.

McLeod herself was a picture of calmness.

In a perfect example of why she has been dubbed ‘CandICE’ by sections of fans on social media, the 24-year-old senior championship rookie downplayed the poise and timing she showed on the anchor leg to secure the bronze, simply offering: “I just did what I had to do.”

McLeod added: “Honestly, this is one of the races that I was not nervous about at all. I know I am inexperienced in the 4x400 metres but I really wanted to ensure I gave my best, contribute to the team, and that’s what I did.”

Russell, who secured a personal best (53.08 seconds) in her individual event, the 400m hurdles, welcomed her first Olympic medal.

“I am really happy. That fourth-place finish (in the 400-metre hurdles) really felt like a medal because I really wanted to get that personal best and I got that and I was just running with guts,” said Russell.

“In the relay, I just wanted to keep the medal position and I am just happy that I am going home with a medal,” Russell added. “I am a part of history, it’s a great feeling to be an Olympic bronze medallist.”

McGregor, the 400 metres semi-finalist, says she was mindful of a need to deliver a strong opening leg and was pleased with her 50.6-second split, which saw her handing over in fourth position. She added that knowing the island’s deep history in the event was added motivation to do well.

“I am a part of history. This is my first Olympic medal and I am really grateful to be a part of this moment, and with a season’s best. I really couldn’t ask for anything else,” said McGregor.

I’m extremely happy with the start I got, knowing that I had to give the team a good starting leg, and I did just that and I am really happy and proud that my team was able to deliver,” added McGregor.