COVID-19 survivor refuses to go through another ordeal, takes the vaccine 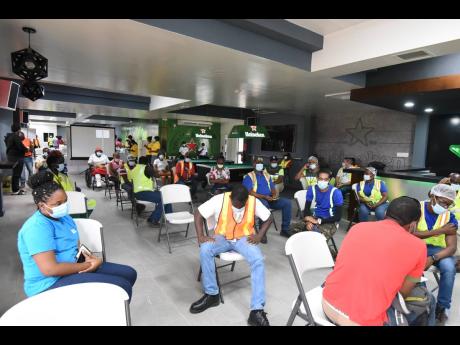 Kenyon Hemans
Employees of Red Stripe and other companies along the Spanish Town Road gather at the Red Stripe Oval to be vaccinated againt COVID-19.

A COVID-19 survivor, fearful of death, does not wish to go through the agony he went through when he first got the virus last November. Cedric Williamson, who has experienced some of the adverse symptoms of the killer virus, believes that if he had any underlying ailments, he would have died when he first caught the virus. “If I had breathing issues with this fatigue then this definitely is a killer flu, so anything at all that would help I'll take it.”

He described the feeling as “not so bad”. However, he did note that the loss of taste and smell was an unusual feeling for him. Experiencing major fatigue, Williamson hopes to never get the virus again.

He is relieved, though, that the vaccines have come to him instead. Thanks to Red Stripe's launch of their own Private Sector Vaccine Initiative, he has immediate access to the vaccine.

Under the theme 'Trust The Facts. Get The Vax', Red Stripe, one of Jamaica's top breweries, in partnership with companies such as Massy Distributors, Jamaica Biscuit Company, Pepsi-Cola Jamaica and much others, collaborated with the Private Sector Vaccine Initiate and launched their vaccination drive yesterday morning. Some 500 persons were pre-registered to take the three vaccines available locally: Pfizer, AstraZeneca and Johnson & Johnson.

The vaccination drive, which has been made for employees of companies along the Spanish Town Road Industrial Belt, along with their dependents, were invited to get the jab as early as 9 a.m.

“Vaccination saves lives and we believe in the science of vaccination,” said Luis Prata, managing director of Red Stripe. In efforts to ensure that all workers and their families are safe in the midst of a pandemic, he says the best way that the company could be of assistance was through making vaccines available its staff members. “It's the best way to get back to normal,” he assured, recognising that there has been a need among the working population for an initiative such as this to be established.

He also admitted that the company anticipated a vaccination take up of approximately 350 persons. However, surpassing his expectations, over 500 persons were reportedly registered for the jab by 10 a.m. Approximately 630 doses were administered.

“We recognise that as members of the business community, we have a role to play in helping Jamaica in this fight against COVID-19,” Prata said.

HELP FOR THE UNDECIDED

Executive Director of the Private Sector Organisation of Jamaica, Imega Breese-McNab, while noting that there is still a strong sense of hesitancy among the population, says initiatives such as this one has been established to help the undecided. Encouraging persons to make use of reputable sources, such as the Private Sector Vaccine Initiative website and the Ministry of Health and Wellness, Breese-McNab wishes for education to be the main priority of our people.

“We need to make it convenient for our staff to get vaccinated ... [as we] lead by example,” she added.

With a suitable turnout, many workers say they are appreciative of the initiative being where they work. This has made it easier for those who otherwise could not find the time to travel to other locations to get the jab.

Angela Wellington whose husband is employed at Red Stripe, she says she finds where this initiative has been effective being that it is so close by. “I think it's necessary, it's just the thing to do,” says Wellington. She says her parents and mother-in-law have finally see that things are “getting out of hand” and decided to take the vaccine.

Bradley Mitchell, an employee of Red Stripe, says “it's like a tug of war” as he has been left in the middle of an information overload. With various sources coming forward with what seems to be a new discovery about the effects of the vaccine, he remains uncertain of what is the right choice. Despite consulting his doctors up to three times about his health, he continues to worry because of his high blood pressure, acid reflux issues, and having an enlarged heart.