Moiyan Jay Williams speaks of his new lease on life 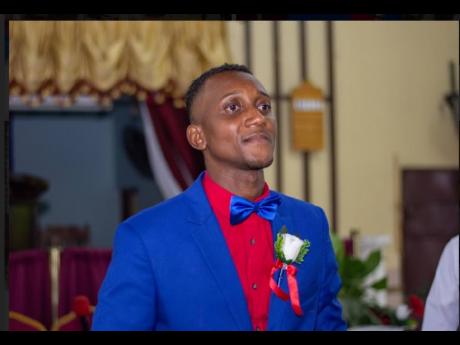 Thirty-year-old Moiyan Jay Williams of Kitson Town in St Catherine is singing a song of gratitude and praise.

He shares the story of how he visited the entry way of death but was snatched from the deadly encounter by the hands of God.

“Five years ago, I was diagnosed with an inflammatory bowel disease: ulcerative colitis. The symptoms that come with it consist of rectal bleeding, using the bathroom 20 times for the day. My weight dropped to 114 pounds, loss of appetite, and my blood count fell to five,” he shared.

Williams told Family and Religion that amid extreme abdominal pain and sleepless nights associated with his diagnosis, he was also forced to wear adult diapers.

He added: “My body was decreasing to the point where I felt like it was the end of my life.”

Another storm of agony flooded his life, according to Williams, when he was again admitted to the hospital in January of this year, simultaneously with his pregnant wife, who was warded to give birth to their baby girl.

He recalled: “Immediately, I got worried. My face filled with tears knowing I’m feeling Mr Death knocking at my door and the thought of dying and not seeing my baby.”

The 30-year-old, who shared that he is a Christian, said he had been praying for help, and God stepped in on time.

According to him: “My Jesus suddenly stepped in and worked His miracle upon me. I also was focusing on the Bible text Psalm 91 and the hymn My Hope Is Built on Nothing Less, which kept me circumspect, having the faith that my Lord will come through for me. My blood elevated. My appetite returned. My weight and all that I lost were regained. Who can it be but Jesus?”

The father of three shared that he was able to lay eyes on his daughter for the first time when she was three months old.

Thanking God all the while, he described the moment he left the hospital to go home to his wife, two sons, and daughter as overwhelming.

“I cried a lot. I felt so happy. I hugged and kissed them many times … . It’s the grace of God.

“My brothers and sisters, I’m imploring you all to focus on Jesus. He never fails, and those who are sick and reading my story, trust and obey God no matter the situation. He will fix it.

“Special thanks to my friends, family, and the Kitson Town district of churches for their prayers and kind words of encouragement,” Williams said.