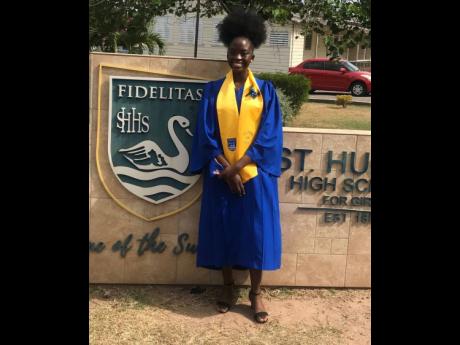 Despite her struggle with maintaining her mental health throughout the ongoing pandemic and preparing for her Caribbean Secondary Education Certificate (CSEC) exams, Dannyelle-Jordon Bailey has come out swinging with eight grade ones, seven of them being distinctions.

Sharing her challenge with not being able to always to keep her emotions in check, Bailey said she had to push through and find a balance.

“I do consider myself happy sometimes, but I am not always the happiest of persons and it can be a little discouraging when I have to be studying and I am not feeling it 100 per cent.”

The 17-year-old St Hugh’s High School student, who attributed her success to strong family support and accessibility to online and offline learning resources, admitted that another of her greatest challenges was coping with feelings of extreme fatigue.

“The online teaching-learning modality is one thing, but I felt really burnt out because our bodies have a timer. When May and June came around, I started feeling lethargic because it’s the norm that school ends during that time. However, the exams were constantly being pushed back so it was like I was feeling burnt out from being burnt out.”

She said though it took some time to adjust to virtual school and process the rigours of each day, it soon became like second nature.

“At first it [online learning] was hard, considering I had been going to school physically for more than 10 years, but as time progressed it became easier as I had the resources, and that played an important role.”

Though academic excellence was apparently entrenched in her from birth, Bailey admitted that it wasn’t until the ninth grade that she began taking school seriously.

Having managed to get a grade one after sitting the Electronic Document Preparation and Management exam while in fourth form last year, Bailey said she expected that she would continue to excel, but not as much as she actually did in her recent CSEC exams.

“The teachers told me I would do well based on my performance. I was predicting ones but I didn’t necessarily believe that at all times.”

The teen, who describes herself as a lover of school with very little to no serious challenges in any subject area, admitted that she had to put in a little more effort into the math and physics exams and lean on her parents’ strong academic background.

“Some subjects will require a little more effort. I enjoyed studying for math so it didn’t feel like someone was forcing me to do it. But I would say of the two, I put a lot more effort into physics.”

She continued: “My dad lectures in a subject that relates to geography and so it was easy for me to go to him and ask for help... . My mother lectures in communication, so I got help with English language and English literature. They encouraged me to seek knowledge, not just for school, but in general.”

Bailey, who is now looking forward to enrolling into a sixth form programme, said her ambition is to become an obstetrician/gynaecologist.

“That’s the goal right now. Over the years the expectations I have of myself to do well have kept me going. Doing more than I expected to do when I was younger is what keeps pushing me.”

Bailey is currently a member of the Key Club International, Girl Guides Association, H.E.R (Hegemonic Empower Resilience) Inc. She serves on the executive body of her school’s United Nations Youth Association as president, Debating Society as second vice-president, as well as the Students’ Council as secretary. Outside of school, she holds the position of student ambassador at the EveryMikkle Foundation, and will also be inaugurated as the assistant vice-president for Region 1 of the National Secondary Students’ Council 2021-2022.

She cautioned adults who downplay a young person’s struggle to be mindful of their actions and instead to foster a healthy environment for growth.

“These are the prime years of our socialisation and us moulding ourselves into who we will become in the next five years. Though we can make changes when we get older, what we do now sets the foundation for who we become and you always want to get the foundation right, and that puts a lot of pressure on us. So for someone to believe we can’t be stressed out is not the most logical thing.”

Bailey said she was looking forward to achieving much more than she already has, and enjoying it in the process.