We do not encourage brand preference – Tufton 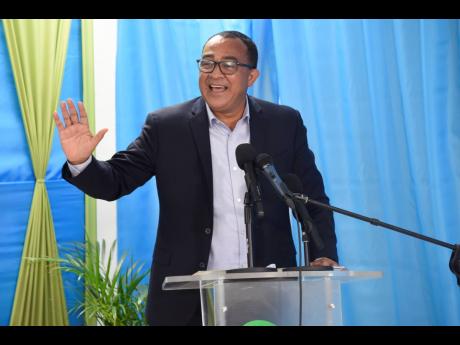 HEALTH MINISTER Dr Christopher Tufton has said the considerable demand for the Pfizer vaccine, which is also fuelled by Jamaicans’ evident preference, will reduce take up for other brands.

Tufton told The Gleaner on Thursday that while the ministry does not encourage brand preferences because “the best vaccine is the first one you get,” he understands why second-dosers are so enthusiastic. As a result, he declared that the Government must “satisfy that enthusiasm very quickly”.

The high levels of activity identified on the ministry’s website, where persons due for their second dose and children 12 to 18 years who are to be vaccinated must first register, demonstrates this eagerness.

The public was able to access the system on Thursday morning, and it has been overloaded since then.

“While I appreciate the desire to do it quickly, you don’t need to rush, we have the vaccines and we are committed to giving second-dosers first... we are very confident to say to those...that they will get their second dose,” said Tufton.

As a result of increased demand, the Government will see an increase in Pfizer take up which may neglect the use of other brands.

Jamaica offers the single-dose Johnson and Johnson vaccine, along with the double-dose of AstraZeneca vaccine and Pfizer, which can be used in children 12-18 years.

There are approximately 240,000 children in this age cohort.

Some 45,630 doses of the Pfizer vaccine gifted to Jamaica by the Government of Suriname arrived on the island Wednesday night, and just over 145,000 doses purchased from the COVAX Facility is expected to reach here by the latest Saturday. “Vaccine won’t be an issue, we will have it and then beyond that, will determine where else we go from there.”

He told The Gleaner that an additional 200,000 vaccines from the US government is expected by the second week in November, this being the second shipment of the more than 600,000 doses of Pfizer vaccines to be donated.

This, he said, will give the ministry enough to strengthen the demands of students and second-dosers and will meet the highly anticipated target of one million jabs before the targeted date of November 30. He said this does not consider the full vaccination of one person, but instead consists of a breakdown of each jab given.

The Ministry of Health and Wellness sets out to resume administering Pfizer vaccines on Monday, November 1.

In spite of a higher demand for the Pfizer vaccine, Tufton said he wished to continue to offer other brands and “to indicate that the efficacy of those brands are similar and hopefully [we’ll] get some take up or reconsideration for those who may prefer one brand over another”.

Approximately 20 per cent of Jamaicans have received their first does, with only 12 per cent of the population being fully vaccinated.