Shakeisha Simms: You are able to rise above your circumstances 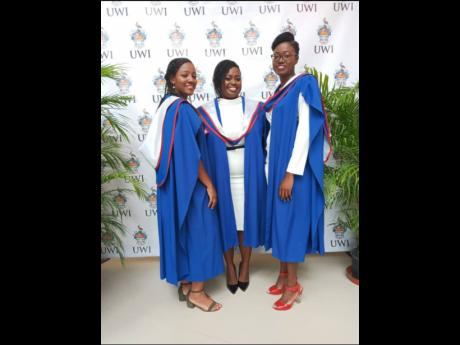 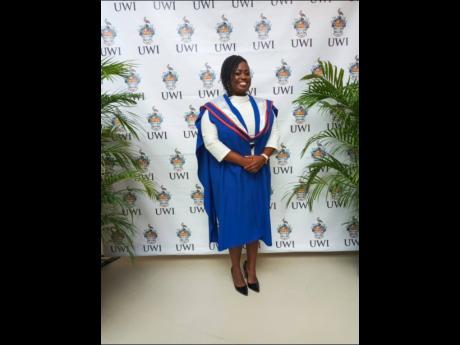 A journey led by God. That is how 37-year-old Shakeisha Simms, a geography educator at Titchfield High School in Portland, sums up her experience with pursuing a Master of Education in Sustainable Development, Global Citizenship and Peace at The University of the West Indies (UWI), Mona.

Simms, who hails from Gayle, St Mary, has been an educator for 15 years, following her graduation from Church Teachers’ College.

“I am from humble beginnings. My childhood was steeped in faith. The church played a great role in my life – how I was brought up and the values that I hold. My mother is my rock. She was the one who instilled discipline and the love for learning. She always said Jesus plus education will bring success,” Simms recalled, adding that her father lived abroad and provided financial support.

The Tacky High School alumna told The Gleaner that she had great teachers and was always willing to impart knowledge, so embarking in the field of education was a perfect fit.

“Teaching has been rewarding and it has been fulfilling. When the students get 100 per cent or 98 per cent pass in CSEC geography, that is amazing, but I also love to see them, especially those who struggled financially or otherwise, complete their five years of high school,” she explained.

Simms is a firm believer in lifelong learning, and after completing her undergraduate degree in 2011, she went on to pursue certificate courses in supervisory management, event planning and professional development.

A few years ago, she stood in front of the United Nations (UN) headquarters in New York, where she uttered the words, ‘I am going to work at the UN’.

She later came across the aforementioned postgraduate programme on UWI’s website and was sold.

“I reached out to the coordinator who said she was happy that I was interested in it but the programme needs 10 to 15 students for it to be facilitated. It was only five of us and I know that it was God who allowed the programme to go on. That was divine intervention – five ladies – and unfortunately, one of my batchmates passed in the second semester of the final year,” she said sombrely.

Her colleague’s death was a dent to the group as they worked closely together, but they pressed on and all four graduated with distinction.

Simms had been diagnosed with endometriosis in February 2019 and surgery was scheduled to remove a cyst from her right ovary in April, months before the start of the master’s programme in September.

“The cyst was so tangled up in the ovary that they had to take out one of my ovaries and a fallopian tube. There was some scarring inside and the doctor had to remove some of the scar tissue,” she explained.

During her three-month recovery, she lost an aunt in June, another in September and a third aunt by November.

In addition to her compounded grief, she was dealing with legal issues relating to the tenureship of property, and that matter is ongoing.

It was challenge after challenge but Simms kept pressing on with God as her guide.

“I got engaged at the end of July 2019 and somehow there were differences, masks started coming off and it just didn’t work out. I grew up in the church and marriage was something I was looking forward to, but by mid-September I became unengaged. It was a lot to deal with at the start of the programme,” she shared.

At least three times per week, she drove from Portland to Kingston for classes and encountered many near-death experiences as she travelled through heavy rains and flooded roadways.

“Even two accidents in one day and I just had to thank Jesus that it didn’t happen,” Simms recounted.

Courses, particularly those that she had not been exposed to before, proved challenging but Simms had a remedy.

She fasted and prayed even more when things got difficult.

The educator reasoned that there were days she believed that she could not make it, but God delivered.

“Project management brought us to our knees. We were crying and we agreed to pray and fast about it. At the end of the course, all of us earned As,” she said.

Encouragement from her coordinator, family, church family and school colleagues kept her going as she sought to balance postgraduate studies with her full-time job as an educator.

Leisure time was placed on the back burner as she always had an assignment or group work due or near due.

When the first case of COVID-19 was confirmed in Jamaica, she knew school closures would follow shortly and so she placed her students in WhatsApp groups and created a Google Classroom using her personal account.

Her students missed no lessons and transitioned seamlessly online, without uncertainty about their education in the pandemic.

“I had to make those plans because I didn’t want my studies or my students to be jeopardised. The achievement of this master’s degree means everything to me. I did it for me. It showed me the grace of God. He showed up, he showed out and he showed off,” she said enthusiastically.

Simms is eager to take on consulting work in the field of sustainability and harbours dreams of pursuing a PhD.