From Rastafarianism to God’s grace 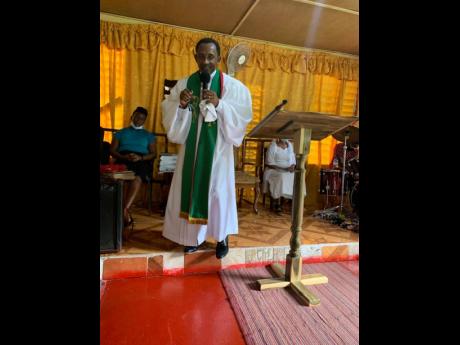 Contributed
Wendell McKoy says there is nothing too hard for God to do.

Celebrating a grand transformation from a life of Rastafarianism, ungodliness and contention to one of grace, spiritual appointment and ordination, Wendell McKoy is declaring that there is absolutely nothing too hard for God to do.

The now reverend peered back into what he described as an early life of failure, familial dysfunction and constant setback.

“I was born in Mount Regale in deep-rural St Mary. My mother and father got separated, I failed at school. I didn’t get a chance to do Common Entrance Examination because of an illness. I attended St Mary Technical for five years with high expectations but no financial support so I was demotivated. I left school with no passes and then life took a turn for the worst,” he shared.

Prior to a plunge, McKoy admitted that things were looking up for a while. He had left his hometown to Kingston to pursue what at the time seemed to be a promising career in music.

“I had an encouraging start with an appearance at Sting and the major clubs. I was getting numerous features in print where I was dubbed as the next sensation, but things took a turn for the worst. I had to go job hunting to support the teenaged mother of my child,” he said.

The young man started working odd jobs which all ended disastrously. Like that the ship he worked on that eventually sunk or the gas station he attended to which almost burned to the ground.

These experiences, coupled with failed relationships became what McKoy described as his new normal.

He shared: “In my quest for answers and solace, I joined Rastafarianism and for a time, it offered that space, but in the midst of heavy consumption of weed, womanising, having my only child being admitted in the hospital because of constant asthma attacks and with my family battling a generational curse of mental illness, Jesus came knocking.”

McKoy told Family and Religion that while actively participating in a secular party one night, he clearly heard the voice of God said, ‘This is not why you were created.’

This, he said, was followed by numerous godly encounters, spanning over a year and culminating in a word shared through a minister, advising that ‘God had something special in [McKoy] that can only be realised when [his] life is surrendered to Jesus’.

“I got baptised on July 27, 2003 and my family received instant deliverance and comprehensive turnaround. My daughter, nephew, niece and sister also got saved. God was doing an amazing work where I was later placed to assist as minister,” he said, adding that he was also being invited to speak at services oversees.

McKoy told Family and Religion that with the help of his wife, he was able to complete his studies and earned a degree in theology.

He was also successful in his application to be ordained as a minister of word and sacrament in the United Church in Jamaica and the Cayman Islands.

“My mother told me that God ordained me as a child. She said I was born prematurely and so delicate that no water could touch my body. She was advised to use olive oil to clean me and did so for three months. She believes I was being prepared by God.

“God is still saving and transforming lives and I can unequivocally, unapologetically recommend Jesus to any one as He turned this nobody into somebody,” McKoy said as he expressed gratitude to his family and church for believing in him.