Brothers on the run linked to Portmore woman’s murder 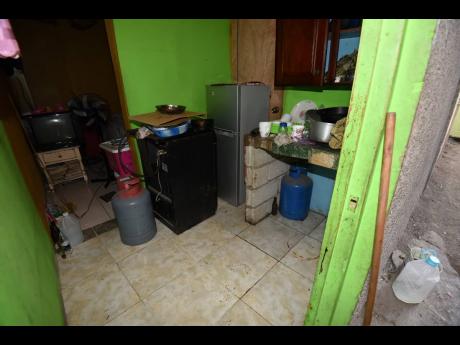 File
Fifty-eight-year-old Joan Stone was killed by an attacker who shot her in the head while she stood by her stove.

Brothers wanted for the murder and shooting of a neighbour, allegedly in full view of others, have been elusive for close to two years and were recently listed as most wanted by the Portmore police. The St Catherine South police named, on the...

Brothers wanted for the murder and shooting of a neighbour, allegedly in full view of others, have been elusive for close to two years and were recently listed as most wanted by the Portmore police.

The St Catherine South police named, on the weekend, Marcus Mitchell and Marky Mitchell, otherwise called ‘Puddie’, both of Pen Way Drive, Passage Fort, among the 10 most wanted men in the division.

The Mitchell brothers are wanted in connection with the murder of Jermaine Litchmore on March 25, 2020, at his home on Passage Fort Drive.

The Gleaner understands that Litchmore, who operated a car wash, had intervened in a family dispute involving the brothers and one of their cousins when he was shot dead.

Even as the Mitchells remain on the run, the main witness in Litchmore’s killing, his mother, 58-year-old Joan Stone, was also murdered 20 months later, at the same Passage Fort Drive home on November 18, 2021.

Stone became disabled after she was reportedly struck by a bullet in her leg at the time her son was killed at their gateway.

The wanted brothers were the targeted family’s immediate neighbours for several years.

Reports are that Stone was killed when a gunman posing as a customer entered her yard, ordered a cigarette, and shot her in front of at least two children.

The police reportedly had warned Stone that based on their intelligence, she would become a target. She had reportedly received information that she would be killed inside her home.

Before her death, on at least two occasions, shots were reportedly fired in her direction while standing at the front of her yard.

Since then, relatives told The Gleaner that Stone stayed to the back of the premises, in hiding, hardly ever leaving her home.

Her family told The Gleaner, in an earlier interview, that she had nowhere else to relocate and they have been watching over their shoulders.

Since the death of the family matriarch, and with the brothers still at large, steps have been taken to enhance security at the premises they have called home for decades.

The Portmore police say nobody has been charged for the mother’s and son’s murders and both investigations are ongoing.

Up to January 22, the division had the third-highest murder record nationally with 11 year-on-year when compared to four in 2021.

Six more persons were also shot and injured during the period under review.

The other most wanted men are told to report to the Greater Portmore Police Station known as ‘Hundred Man’ as soon as possible.

• Marlon Barnett, otherwise called ‘Shortman’ or ‘Jamo’, 41, of Gulf, Gregory Park, in St Catherine, and Tivoli Gardens in Kingston. He is wanted in relation to a shooting in Central Village in St Catherine.

• Manton Brown, 41, of Aires Close in Portmore, St Catherine. He is wanted in connection with a murder committed in April 2017.

Damion Henry, otherwise called ‘Devil’, 21, of Burke Road in Old Harbour, St Catherine. He is wanted in connection with a 2013 murder. He frequents Darliston in Westmoreland and Portmore, St Catherine.

Stokely Collins, otherwise called ‘Peppa’, 49, of Windsor Heights in Central Village, St Catherine. He is wanted in connection with a shooting in March 2020. He frequents Bull Bay, St Andrew.

The police say anyone knowing the whereabouts of these men is asked to contact the Portmore police at 876-989-8422, Crime Stop at 311, or the nearest police station.

Citizens are also reminded that it is a crime to harbour fugitives.