Baptist women seek, save and serve! 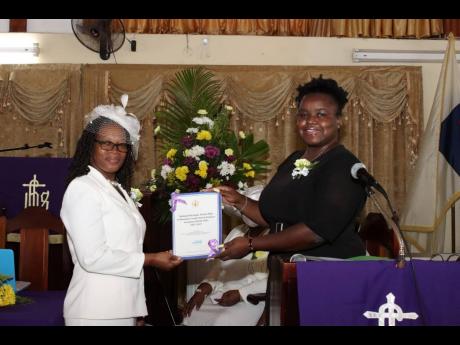 Contributed
President of the Jamaica Baptist Women’s Federation Hilary Morgan (left), receives a copy of the National Strategic Action Plan for the Elimination of Gender-based Violence in Jamaica from Dr Tamika Peart from the Ministry of Gender, Culture, Entertainment and Sport.

The Jamaica Baptist Women’s Federation (JBWF) has taken steps to help the many women who are being abused in the country. Needing to show their love and care in a tangible form, as well as to aid in the process of stemming gender-based violence, they have secured a multiple-bedroom property which is currently being converted to be used as a safe shelter for women and girls.

The organisation informed Family and Religion that plans to operate the shelter are far advanced. With branches in several of the Jamaica Baptist Union’s 340 churches islandwide, they launched their 100th anniversary celebration last Tuesday at the Mamby Park Baptist Church in Kingston.

Among those in attendance was Dr Tamika Peart, director of the National Shelter Programme for Jamaica, who represented Minister of Culture, Gender, Entertainment and Sport Olivia ‘Babsy’ Grange. She said the ministry remains committed to eliminating gender-based violence. The ministry is currently implementing the National Strategic Action Plan to Eliminate Gender-based Violence 2017-2027, as well as the National Shelter Strategy. A copy was handed to president of the JBWF, Hilary Morgan.

“It is our commitment to ensuring that violence is targeted from a gendered perspective. At a policy level, we are fully cognisant that, for us to make the changes necessary, we must provide a coordinated response for women of today who feel threatened emotionally, psychologically, or physically within their private and public life,” Peart said.

She urged the women to pray without ceasing for women and girls especially, as Jamaica prepares to join with the rest of the world in commemorating International Women’s Day in another two weeks.

The Government operates one safe shelter and a promise was made late last year to complete another soon, with the intention to operate three overall. The Woman Inc also operates a shelter. The calls for more shelters have been increasing as women seek safe places to stay after fleeing from abusive partners.

March 8 will be observed as International Women’s Day, but there are increasing concerns about gender-based violence. There have been several cases of the brutal slaying of women by their domestic partners in recent times.

Among those who expressed concern is former Custos of St Andrew Dr Patricia Dunwell, who was also present at Tuesday’s launch.

“Domestic violence has become a scourge in Jamaica due to the number of dysfunctional families. You saw the need and you have turned your focus also on helping the victims of domestic violence,” she told the JBWF representatives.

Acting general secretary of the Jamaica Baptist Union, Rev Merlyn Hyde Riley, said the JBWF has a rich legacy of meeting the needs of the most vulnerable in our communities as they live up to their motto, ‘Seek, save and serve!’

“As a group, you tend not to make a lot of noise, you are not empty barrels. Instead, you go about doing your work, doing the work of the Lord quietly yet effectively,” she said.

Rev Hyde Riley said “the safe shelter project for women and girls is very timely as the country grapples with gender-based violence, which unfortunately has claimed the lives of too many women and destroyed countless families.”

The JBWF is also in the process of establishing a transitional home for former wards of the State. The organisation currently manages the Garland Hall Memorial Children’s Home for wards of the State, and has partnered with organisations like the Women’s Centre of Jamaica Foundation, over the years, to assist adolescent pregnant girls.