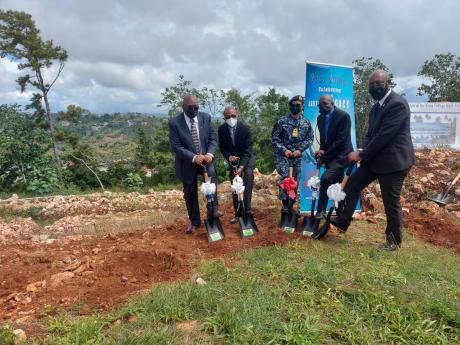 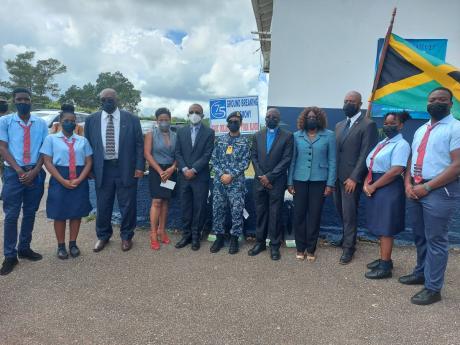 Tamara Bailey
Students, administrators and members of the board of the Knox College with past student, Chief of Defence Staff, Rear Admiral Antonette Wemyss Gorman (centre), at the institution’s groundbreaking ceremony for the school’s sixth form block. 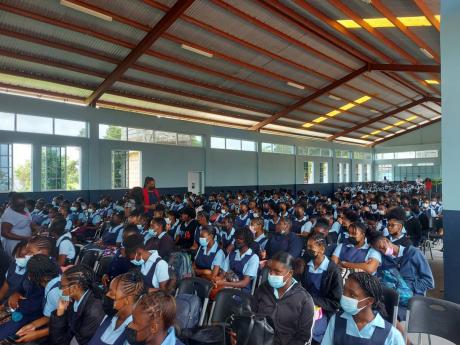 Tamara Bailey
Knox College students in the gymnasium during an empowerment session held at the institution on Monday.
1
2
3

With the sixth form programme at Knox College growing exponentially, the institution is now seeking to raise just under $200 million to build a complex in approximately 18 months, that will be able to accommodate the growing number of eligible students.

The programme offerings, which were discontinued in 1975 to provide support to the then newly established Knox Community College by having students complete advanced studies there, resumed in 2008 with 39 students registered to sit examinations in seven Caribbean Advanced Proficiency Examination (CAPE) subjects.

According to Alexander Bourne, principal at the institution, that number has since increased by over 600 per cent, with 240 students registered in approximately 40 CAPE units.

“The growth of the sixth form programme has created an urgent need for additional classroom space. The agreed solution is to construct a block on the campus that will provide additional modern and state-of-the-art science and computer labs, smart classrooms, office space for staff and student leaders, a digital library and bathroom facilities.”

Bourne revealed that of the $200 million needed to build the sixth form block, $25 million has since being raised through the efforts of the alumni chapters.

An additional $1.5 million was also raised on Monday, following personal contributions from past students and affiliates of the institution, to include CEO of Victoria Mutual Building Society Courtney Campbell, Rear Admiral Antonette Wemyss Gorman, Member of Parliament, North West Clarendon, Phillip Henriques, chair of the Knox Trust Dunbar McFarlene and Principal Bourne, among others.

Bourne, who was speaking at the groundbreaking ceremony at the institution on Monday, said with unsatisfactory performance of students, particularly at the secondary level across the country, a stronger emphasis must be placed on equipping them with the requisite skills for the global space.

“Education is an essential aspect of human development as it ingrains civic and social responsibilities in everyone. In a plural democratic country like Jamaica, education is necessary for all citizens. Unless the citizens are properly educated, our democracy will not work well. This sixth form block is not just for Knox, but it is a significant investment in Jamaica’s future.”

Campbell, chairman of the 75th anniversary fundraising committee, encouraged persons to buy into the vision and make possible a project that has longed been stalled due to inadequate funding.

“We will be approaching local and international foundations because we believe there are many that would wish to be identified with this worthy project. We are confident that it will be successful. We are ready in 2022 to take another leap of faith.”

In a follow-up empowerment session with the students, past student and Chief of Defence Staff, Rear Admiral Antonette Wemyss Gorman, encouraged the students to look beyond any box that persons may place them in and carry on the legacy of excellence that the institution’s graduates are known for.