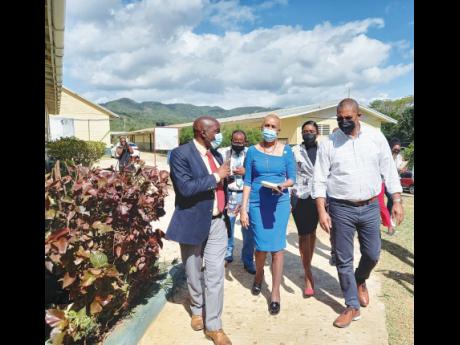 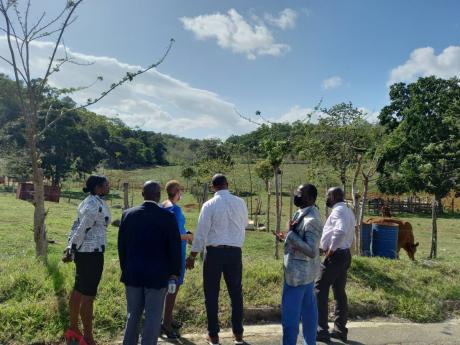 Photo by Tamara Bailey
The 40 acres of land that is expected to accommodate the new Mile Gully High School compound.
1
2

With a number of classrooms rendered unfit for use by the Ministry of Health, no running water, and a student population twice its capacity, administrators at Mile Gully High say they are in dire need of a new school plant and are hopeful that preliminary works will commence in the upcoming financial year.

According to principal, Christopher Tyme, the school, which serves more than 40 communities, has an enrolment of more than 700 students on a compound built to house 350.

“We are not just asking for a new campus because we deserve a new campus, we are asking so we can continue to make even greater strides in the lives of these children. We want to improve them, not only academically but socially because of the conflicts they face in the homes and the communities from which they come,” Tyme said.

The institution, with more than 15 feeder schools in the constituency, according to Manchester North West Member of Parliament Mikael Phillips, can scarcely accommodate the students from the host community, forcing some of them to seek placement at other institutions miles away.

“The school started here about 100 years ago, and up to recently, we were still using buildings in that original building that has classrooms, which has now been condemned by the health department. ... That has now put additional pressure on the school infrastructure ... ,” said Phillips.

Having acquired 40 acres of land from bauxite producer Windalco less than a mile away from the existing school property, Phillips is hoping that the Government will make the decades-long wish for a new site a reality.

The new grounds would facilitate a farm and playing field.

Phillips said that his vision for Mile Gully High is for it to be transformed into a technical school, with students tapping jobs in the bauxite industry, farming, and other skill-dependent sectors.

He said that once the new high school is completed, the primary school would be relocated to the existing high school. The old primary school could then be retrofitted into a skills training centre, said Phillips.

Minister of Education Fayval Williams, who toured the facility last Friday, said with millions allocated for infrastructural development among other areas, across schools annually, it has not been a “budget issue at the ministry but an execution issue”.

“In the next fiscal year across the school system, you will begin to see more things being done in our schools ... . In terms of Mile Gully, it will be programmed this coming year for the beginning of developmental work that is necessary to take us through the process,” she said.

The first steps, the education minister said, would be the completion of land transfers and titling.

With a number of seventh-graders reading four levels lower, the school has had to transport students from as far as Balaclava, St Elizabeth, and to re-engage 263 students who were unaccounted for during online classes during the two-year coronavirus pandemic.

Tyme said the school is determined to give students the best shot at success despite mounting challenges.

“Our sixth-form programme, only three years old, would have moved from an average pass rate of 79 per cent to 92 per cent, even in the pandemic. We have at least four students per year who are recognised on the CXC merit list … and we consistently achieve over 80 per cent passes in a number of CSEC subjects,” the principal said.

Chairperson of the board of governors, Simone Scarlett, said that the establishment of a literacy room to help counter the learning loss cited nationally as a feature of concern caused by the pandemic.

Mile Gully is also looking to implement a training and mentorship programme for at-risk students.