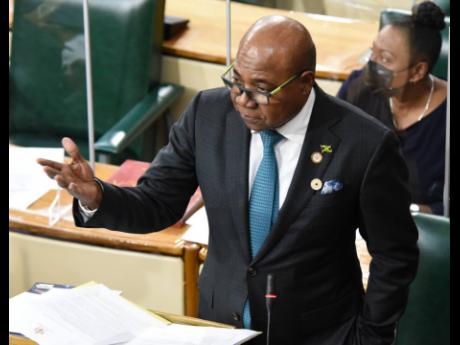 Ian Allen
Edmund Bartlett, minister of tourism, as he makes his presentation to the 2022 Sectoral Debate during the sitting of the House of Representatives on Tuesday.

Government’s projection is for three million cruise ship passengers to be making Jamaica their destination in another three years’ time, Minister of Tourism Edmund Bartlett has said.

“We have established the infrastructure, and we will continue to engage the marketplace to accomplish this critical objective. To do this, the Jamaica Tourist Board and Jamaica Vacations will intensify marketing efforts to position Jamaica as the destination of choice for cruise travellers from markets such as the Americas, Europe, Asia and the Middle East,” Bartlett said in Parliament on Tuesday as he made his contribution to the Sectoral Debate.

The projection was in keeping with what the minister outlined as a recovery of the sector following a 17-month hiatus caused by the COVID-19 pandemic in which many countries closed their borders with some even turning away cruise ships that arrived at their ports.

Noting the importance of the subsector, Bartlett said cruise shipping provides employment for a significant number of small and medium-sized tourism enterprises.

“Once the ship docks, the dollars begin to flow into the hands of the average citizen, and that, in my opinion, is the strength of cruise tourism. It does, I feel, provide the quickest means of wealth transfer due to the very straightforward jobs required. It has an immediate economic impact on ordinary people’s lives, which is critical to the survival of small towns, in particular,” the tourism minister pointed out.

He is equally gung-ho about the prospects for airlift that brings stopover visitors to the country, projecting a 10 per cent increase in airlines seats during the 2022 winter tourist season than in 2019, with stopover visitor arrivals expected to reach 1.2 million between December 2021 and the end of this month. This, he pointed out, would be some 7.5 per cent more than in the 2019 pre-pandemic year.

American Airlines, according to Minister Bartlett, is providing up to 17 non-stop flights per day on many major routes to Jamaica with Miami, Dallas, Charlotte, Chicago, and Philadelphia serving important gateways for tourists coming to Jamaica. By June this year, and following months of flight restrictions in the first half of 2021, US airline JetBlue is also expected to increase its daily non-stop flights between New York’s John F. Kennedy International Airport and Jamaica, to nine.

More direct flights are also coming on stream as of May 5 this year with Frontier Airlines, which began non-stop service from Miami, Atlanta and Orlando to Montego Bay in November 2021, beginning scheduled service to Kingston. This is said to be part of its 12 flights per week from various USA gateways to Jamaica. Direct Frontier flights from Denver, Colorado in the United States to Jamaica are set to begin later this year.

Airline TUI of Belgium is scheduled to operate two direct flights each week starting April between Brussels International Airport and Montego Bay, while TUI Netherlands is slated to put on one direct flight per week between Amsterdam Schiphol International Airport and Montego Bay. Meanwhile, VING, a subsidiary of Sunclass Airlines, is expected to restart direct flights from Stockholm, Sweden, to Jamaica every two weeks starting in November this year and running through to March next year.

He noted that during 2021, several new flight schedules were added bringing visitors to Jamaica from several countries including Canada, Switzerland, Curaçao and Miami, Orlando and Atlanta in the United States, Germany.

Even as the tourism minister talks up tourist arrivals, he is also endorsing the Government’s plans to further improve the tourism product and offer better entertainment to the increased number of visitors. Bartlett said plans announced by the Prime Minister Andrew Holness during his Budget speech for the construction of a $50-million Tourism Entertainment Academy, on lands of the Montego Bay Convention Centre in St James, were intended to enhance the country’s vibrant cultural and entertainment scene. Entertainment, he noted, was one of the many reasons millions of visitors travel to Jamaica each year.