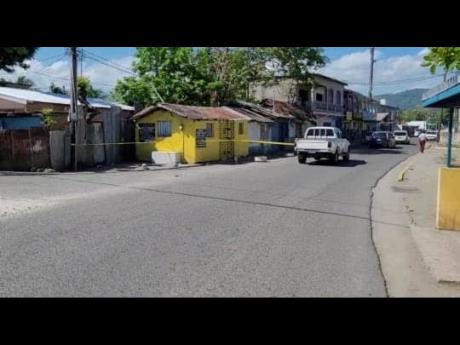 Residents in the farming community of Crooked River in Annotto Bay, St Mary, are on edge following the shooting death of a shopkeeper by a lone gunman Sunday evening.

The killing of 44-year-old Claudia Consingh, who was shot while serving cigarette to a man, has since triggered unease among residents, who were reluctant to speak to the media because they fear that there will be a reprisal.

“I am sure that things a go happen and dis naah go just go so,” said a resident, who gave his name only as Marcus.

“We never expect anything like dis fi happen in this community, as Claudia was one of the kindest and most friendly people that I know. She don’t deserve to go out like this, and clearly robbery was not the motive, as nothing was removed from the shop. This is a senseless killing and I cannot think of anything that she could have done to deserve this. But God naah sleep and anyone that is behind her death will have his or her day too,” he added.

A relative of the deceased, who requested anonymity, said that he witnessed the entire incident, when the woman was shot after being called out of her house by a man who said he wanted to purchase cigarettes.

“She came out of the house and I saw when she entered the shop,” said the relative.

“The man ordered a cigarette, and she stooped down under the counter and took up the item. She got back up and turned sideways, he pulled a gun and shot her in the face. I was so frightened, but the good thing is that he didn’t see me. He then fled the shop on foot,” the relative added.

According to the police, following the shooting of Consingh, the man fled the community, but later returned under the cover of darkness and started pelting several houses with stones, which triggered a distress call from residents who requested urgent assistance from the lawmen.

The police responded, but the man managed to elude them. However, during a patrol of the Annotto Bay area, close to the town, the man was spotted and upon the approach of the police, he allegedly pulled a handgun and was shot fatally.

He was identified as 25-year-old Fredrick Palmer, otherwise ‘Sledge’, of Crooked River in Annotto Bay.

Meanwhile, the Annotto Bay police are tight-lipped about the incident and no motive has been established for the killing.

Consingh’s murder was the 10th committed in the St Mary Police Division since the start of 2022.