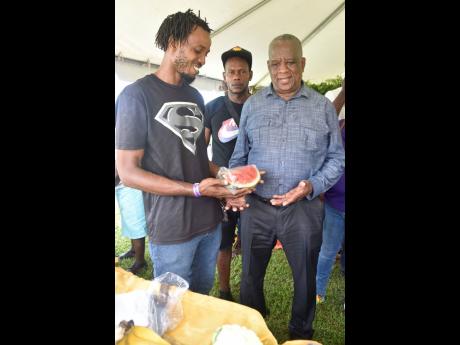 Seven years after ditching life in the Corporate Area for farming in Three Hills, St Mary, Conzley Clarke and Federick Samuels have no regrets.

That sense of satisfaction was evident as the two farmers weighed and sold a wide range of produce to customers at Monday’s staging of the St Mary Agri-Expo.

Clarke told The Gleaner that he moved to Kingston in 1994, went to high school, and joined the military at 18 years old.

He started farming just over two years ago, after completing 20 years of service to the Jamaica Defence Force.

“At the end of my contract in 2020, I decided to move back to St Mary. I wanted a change in lifestyle. Farming wasn’t the plan, but I saw the opportunity,” he said, adding that his first step was to get a plot of land.

Clarke disclosed that he has an interest in growing mulberry and lumber trees and will be seeking assistance from the Forestry Department shortly.

He plans to launch into organic and exotic farming, as well as horticulture. Strawberry and pond apple are two of the exotic fruits he’ll be experimenting with.

Plantain, banana, peanut, pumpkin, sorrel, beans, soursop, sweetsop, custard apple, and yam are among the produce he reaps from his farm.

“To be able to grow my own food is a great achievement. I really want to do more, but because of where my farm is located, I don’t have a consistent water supply, so I have to harvest rainwater or use my vehicle to transport water,” the former soldier said.

He added: “I have no regrets about leaving Kingston. Fresh air, fresh food, and it’s not as stressful.”

Meanwhile, Samuels returned to his home parish five years ago to help his mother manage her farm.

“I realised that farming gave her everything, so I decided to get involved to help me achieve my goals in life. I was living in Kingston so long and couldn’t buy a vehicle,” he explained of his decision to venture out on his own.

Samuels plants a variety of yams, sweet pepper, banana and Scotch bonnet pepper, among other things.

An acre of Scotch bonnet pepper, when reaped, can turn over revenue of $4 million.

Through a cooperative, he has been able to tap into that market as a means of building capital for further expansion.

Samuels professes a time-tested philosophy: that regardless of the size of the property, multicropping is always a win-win.

“If you plant one crop alone and the crop doesn’t do well, that’s a loss,” he said.

The farmer also utilises a greenhouse on his farm, with the feature of environmental control offering ideal growing conditions for optimal yields.

“I plant the seeds in a tray and they stay in the greenhouse until they are fit enough to be transferred outside. Ants and other insects can take away the seeds, so using the greenhouse prevents that and the plants also get a better start,” he explained.

Samuels added that he is grateful that the expo could be held after a two-year hiatus caused by the COVID-19 pandemic.

The expo, he said, provides the opportunity for marketing and also makes agriculture stakeholders accessible.

“Farming is the best thing I’ve ever done and nothing can compare to it,” he remarked.