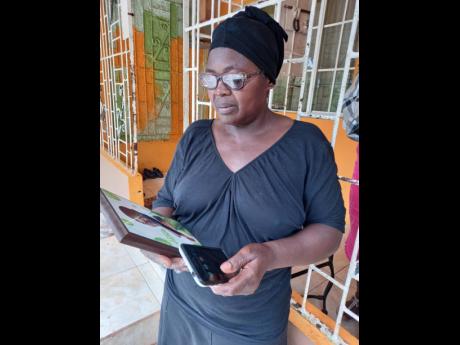 The bellows of a woman’s anguish was the last thing Joy Jones heard as the conversation she was having with her daughter ended abruptly and the news she wished not to hear was later confirmed.

At approximately 1:40 p.m. on Tuesday, Heather Grant was travelling with her husband, her stepsister and her stepsister’s husband, Nigel Ambersley, from Manchester to Linstead when the Toyota Starlet they were in collided with a Nissan Latio motor car in Osborne Store, Clarendon.

Grant and Ambersley were taken to the May Pen Hospital where they were pronounced dead while Grant’s husband, a police corporal, was hospitalised in serious condition and later transferred to the Kingston Public Hospital.

Her stepsister remains in the May Pen Hospital.

Described as a hard-working, compassionate woman who was loved by all, Grant was regarded highly in her family, particularly by her mother with whom The Gleaner spoke.

“My daughter was very friendly and down to earth. She was a farmer and did agro-processing, making wines. She lived here with her husband and children and in everything it was she, her husband and me. If it’s weeding grass, it was the three of us ... if it’s planting or plucking chicken, it was all of us.”

But the sad reality of no longer hearing her daughter’s voice and sharing her company on the farm is one Jones finds most difficult to accept.

Had she known that the unease she felt prior to her family’s leaving was indicative of this tragedy, she would have done everything in her powers to detain them.

“My stepdaughter and her husband Nigel, who were visiting from overseas, just came on Monday and were going to Linstead Tuesday to visit my stepdaughter’s mom. They all left from the house and my stepdaughter told me that she wanted me to come to her birthday party tomorrow (Wednesday) in Linstead. My daughter Heather reminded me to pick up her baby from school, gave me my fare and a bottle of sanitiser and told me she loved me. She hugged me and told me she soon come.”

But at approximately 1:34 p.m., just before Jones went to pick up her grandson, Grant’s younger of two children from school, she got a call from her daughter asking her if she had eaten and unknowingly giving her the opportunity to speak to her for the last time.

“I heard someone cry out and I asked her what was that. I got no response. I called again, I called my son-in-law, and my stepdaughter and got no answer … I figured it was an accident. When I came back home after picking up the baby from school, I got a call from a customer and she told me about the accident.”

Jones said on her way to May Pen, her second daughter called and confirmed the tragic news no mother wishes to hear.

“When I reached to the hospital and the police questioned me, they asked if I was sure I wanted to see her and I told them I needed to see my baby. When they uncovered her and I saw her face, all I could do was scream out her name and shake her, because I couldn’t believe she was dead.”

Jones said her stepdaughter, who sustained broken hips and ribs, will return to Florida, USA, for surgery with her husband’s body for burial.

“My other children are not taking the news of their sister’s death so well. The doctor broke the news late last night to my son-in-law and he broke down, but I don’t know if he has really processed it. They were married for 13 years.”

“My granddaughter, who is old enough to process her mother’s death, cried so much, but she said she is happy for the happy times she had with her mom and that makes me happy. Until their father has recovered, I will be their mother and hold them even closer to me. I will continue to ask God for strength,” Jones said.