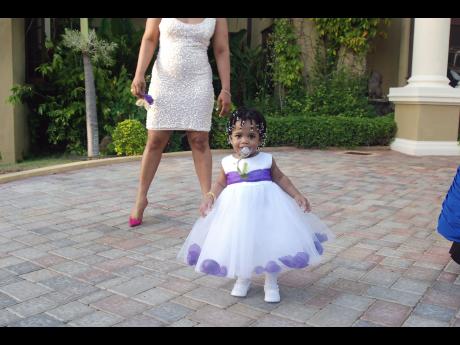 Barrington Flemming
Cute as a button, Camryn Watson shows that she is already a show-stopper. 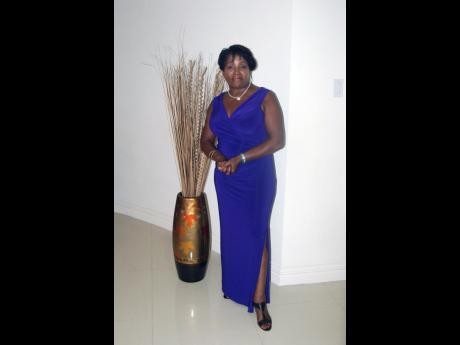 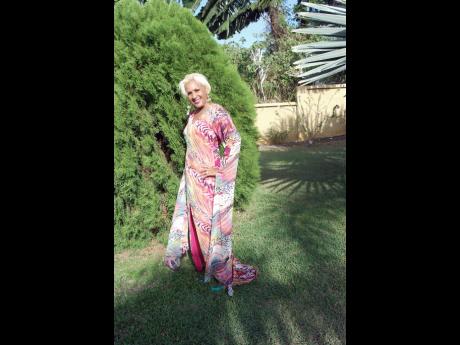 Barrington Flemming
Tena Dunbar added a lot of colour to the proceedings. 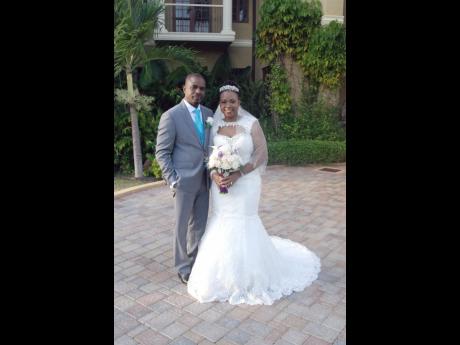 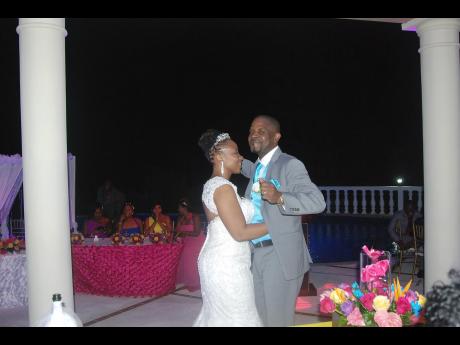 Barrington Flemming
The happy couple enjoying their first dance as husband and wife. 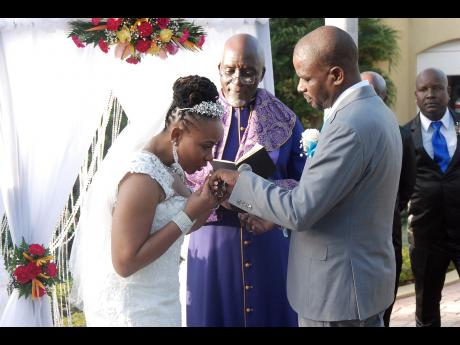 Barrington Flemming
The bride leans in to kiss the ring she just placed on Meadows' finger as a sign of her devotion. Meadows similarly kissed the ring he placed on Campbell's finger. Looking on is officiating minister the Reverend Daniel Samuels. 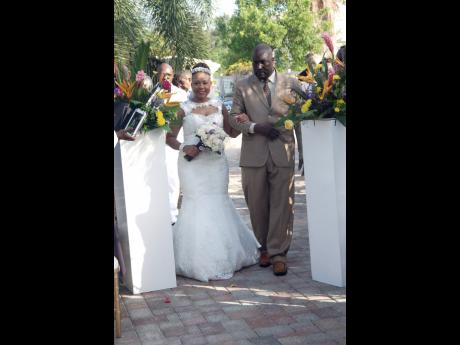 Contributed
Campbell is escorted down the aisle by her uncle, Eli Henry. 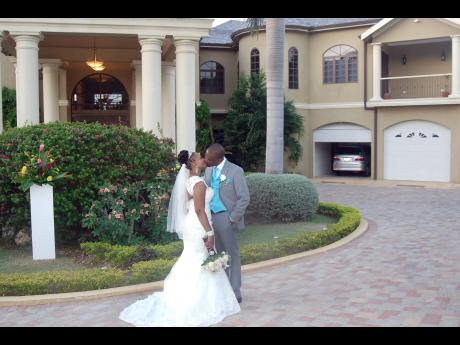 Barrington Flemming
A romantic moment between the happy couple as they share a kiss. 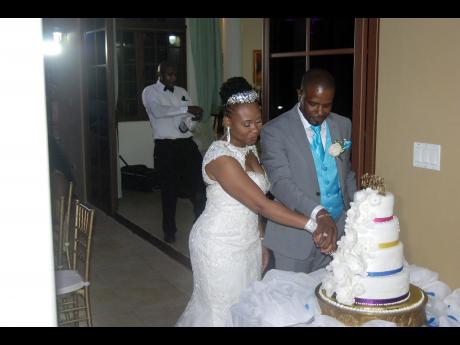 With the sun slowly setting and the strong trade winds blowing through the trees, Dennis Meadows former Jamaica Labour Party (JLP) Senator and Convenor of CAPI, took the hand of his lady love - businesswoman Angella Campbell in marriage.

The wedding was hosted on the entryway to the swanky Golden Castle Villa, ensconced on the majestic Cinnamon Hill Golf Course on the grounds of the Rose Hall Great House. The mother of the bride Nezline Johnson, glided down the aisle after which the bridesmaids lit up the afternoon in beautiful bright summer hues - the matron of Honour striking in dahlia purple, with bridesmaids in citrus yellow, cobalt blue, and fuchsia, while the groomsmen were adorned in black suits with ties that matched the bridesmaids dresses.

Angella arrived in a white stretch limousine, and was escorted down the aisle on the arm of her uncle Eli Henry to the strains of The One He Kept For Me.

With an elegantly decorated chuppah as the backdrop, officiating Minister Reverend Daniel Samuels led Meadows and Campbell through their vows, which was sealed with a kiss.

Despite the strong winds extinguishing the flames of their individual purple candles, Meadows and Campbell proved to be a determined couple, and succeeded against the winds in lighting their unity candle.

Saxophonist Daniel Phoenix thrilled guests while the register was signed, after which Reverend Samuels presented the bride and groom, to the delight of their more than 100 guests.

The reception was hosted poolside with tables awash in citrus yellow, complemented by fuchsia and purple accents.

Master of Ceremony Fitzroy Donaldson expertly guided the proceedings with the toasts to the bride's mother by Doreen Henry, the bride by Lorna Deers, and the

Groom by Former Prime Minister Bruce Golding. Golding described Meadows as a rebel with many causes for which he cares passionately and deals with responsibly. "If it was 20 years ago, I would not have recommended that Angella marry him - he was brash and aggressive. But due to a lot of sand paper from myself and others, he has now become a diamond and a responsible, upstanding man," said Golding.

Their romance had its genesis in 2006 when Dennis Meadows made his foray into politics, offering himself as a candidate for the Jamaica Labour Party in North Trelawny. His political bid was unsuccessful, but it led to him meeting the beautiful Campbell.

It was not the regular fairytale romance, because Angella was more of a home body - from work to home, but she and Meadows shared political beliefs and there was mutual understanding.

Dennis, for his part in the groom's reply, said he is not the type to be easily won over, but he has grown to love Angella deeply. "I am a person who when I love, I truly love, and Angella is somebody that I have really grown to love and love deeply."