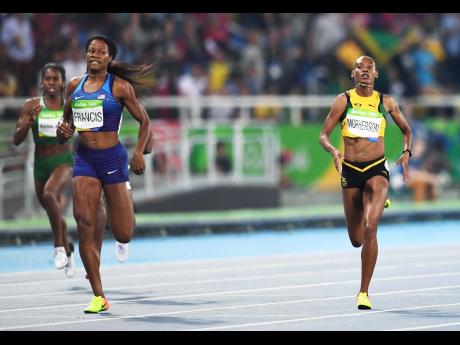 Raymond KC Graham: Most attention from a Caribbean aspect will be focused today on the Women's 400 metres finals, as we could see someone from the region going all the way in what is expected to be a cracker.

Andre Lowe: It's a big one, and one that will bring everyone out of their seats. Allyson Felix desperately wants an Olympic 400m gold medal and Shaunae Miller is sure to make it difficult. The Jamaicans, especially Shericka Jackson, look really good as well. This should be fun.

Raymond Graham: As I said earlier in the season, Jackson would have been Jamaica's best hope for a medal at Rio, and she has not disappointed as she looked immaculate in her semis, and it will be interesting to see if she will improve on the bronze medal she mined at the World Championships last year.

Andre Lowe: It will be hard for her. She surprised even herself with that 49.8 personal best, and considering the type of season she has had, with all the struggles and poor times, who knows what she can do here. I think the bronze is her best bet.

Raymond Graham: Felix has shown that she is ready for the gold despite Miller coming to Rio as the favourite. She also has a big advantage here as she is in Lane Four as Miller in Lane Seven will have to run her own race, seeing that the dangers are all behind her and the lane draw here could make all the difference.

Andre Lowe: Felix made a big statement with that dominant win over Miller in the semis. She is ready; she will win the gold medal. Silver for Miller, and after her run yesterday, bronze for Jackson.

Raymond Graham: For the first time, I will agree with you. Based on that run, and with her experience, I do not see Felix losing. The real battle could be for silver and bronze, and I give Miller a slight edge here while Jackson, Hastings (Natasha), and Francis (Phyllis) will battle out for bronze. I like Francis here for the bronze.