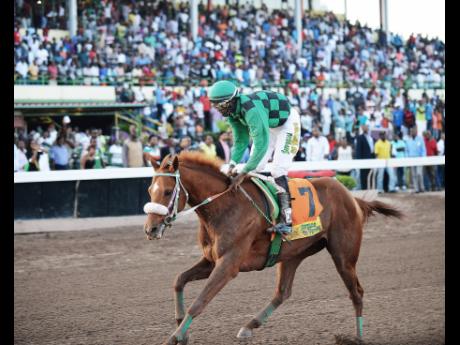 History repeated itself in the $13.9 million Supreme Ventures Diamond Mile at Caymanas Park yesterday when the 8-5 favourite SEEKING MY DREAM won the richest race on the calendar for the second consecutive year.

If that wasn't enough, SEEKING MY DREAM covered the distance in stakes record-equalling 1:36.2, the same time he returned when winning the race last year.

The chestnut colt by Seeking the Glory out of the 2008 Triple Crown winner and 'Horse of the Year' Alsafra was even more impressive this time, winning by five lengths from the recent Superstakes winner BIGDADDYKOOL (7-2) under former champion Dick Cardenas, with a neck to spare over the 52-1 outsider HOUDINI'S MAGIC with Linton Steadman aboard, and the much improved 3-y-o gelding JAMAI RAJA running a spirited race to finish fourth at odds of 8-1.

Both BIGDADDYKOOL and HOUDINI'S MAGIC are conditioned by trainer Anthony Nunes, who, like DaCosta, saddled two winners on the 14-race programme.

Never far off the pace in fourth as the top sprinter BUZZ NIGHTMARE (3-1), with outgoing champion Shane Ellis aboard, led from stable-companion CAMPESINO (29-1) and JAMAI RAJA in a star-studded field of 16, BUZZ NIGHTMARE came under pressure from JAMAI RAJA entering the straight. By then, SEEKING MY DREAM was in top gear and soon disposed of JAMAI RAJA for an emphatic win.

DaCosta, who, with this victory, is now safely on course for an unprecedented 16th trainers' title, described the performance as 'Horse of the Year' quality, adding that all was right for this race.

"Although disappointing in the Gold Cup and Superstakes in recent weeks, he was trained differently for this race, and with a mile his best trip, lived up to our expectations in no uncertain fashion," DaCosta said.

Smith, accompanied by his wife, Karleen, and sons, Duane and Jay, disclosed that the win was a fitting late present for his December 7, 48th wedding anniversary.

"The jockey rode a brilliant race and DaCosta went that extra mile to ensure that the horse was in tip-top shape", he added in the presence of his parliamentary colleague, Finance Minister Audley Shaw, who was present at the track to lend his support.

SEEKING MY DREAM is bred by Sherman Clachar and Norman Gordon and this was his fifth win from eight starts this season.

On a day when the stewards disqualified the first three past the post in the fourth race for causing interference to Dane Nelson's horse, LUCKY NINE, an unprecedented move, 9-5 chance PINELOPE (Cardenas up) produced a terrific late run to catch 4-5 favourite CHOO CHOO BLUE (subsequently disqualified) on the line in the second running of the BGLC Stakes overnight allowance race over 1400 metres.