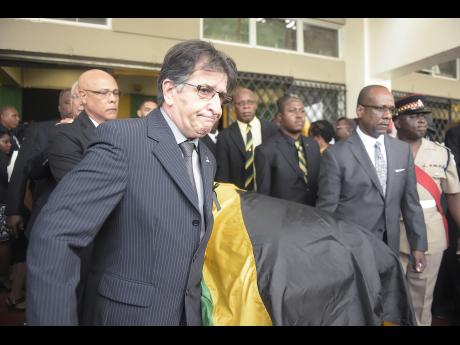 Many glowing tributes were paid to the late Jamaica Football Federation president Captain Horace Burrell at his thanksgiving service which was held at the National Arena yesterday.

Minister Grange said he was a patriot.

"Patriot because of love of country, and he created that might and dedication for the development of Jamaican football," she stated.

Former Prime Minister Portia Simpson-Miller noted that she shared a special bond with Burrell as they were cousins, and she believes Jamaica has lost a 'giant'.

"He was a real friend and a consummate nation builder. His ability to open doors for cooperation and support for the benefits of Jamaicans was legendary," Simpson Miller said.

A MAN OF CLASS

Former technical director, Rene Simies, described Burrell as a "man of class" and a "real top of the line", and said that Jamaica should follow his example and build on his legacy.

CONCACAF President Victor Montagliani said Burrell was a visionary and a ruthless negotiator.

"He didn't take 'no' for an answer, and I was a victim of this many times", he said.

Former JFF General Secretary Horace Reid, a long-time friend of Burrell, who gave the eulogy, said the Captain developed a keen sense of determination very early and that it carried him through life.

Captain's Bakery employees Norma Fearon-Moody, Alice Gillespie-Clarke and Sharon Irons-Francis called Burrell a mentor and a leader who brought out the best in his employees at all levels.

The body of the beloved Captain was placed at the entrance to the arena for open viewing for an hour before being relocated to the stage area at the front of the audience.

Meanwhile, the interment was held in private at Up Park Camp immediately following the service at the National Arena. Burrell's body was driven to his final resting place by the man who had been his driver for more than 20 years, Alphanso 'Styles' Allen.