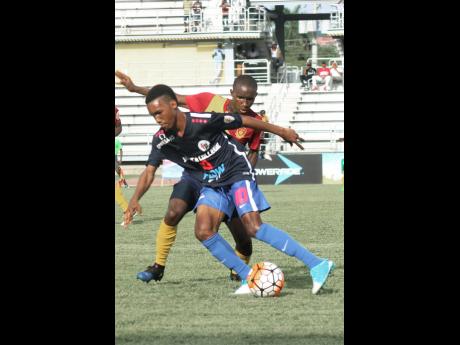 Camperdown coach Christopher Bender said if they can produce two good halves against St Andrew Technical in the first leg of their ISSA-Flow Manning Cup round-of-16 knockout game today at the Constant Spring Sports Complex, he has no doubt that they can take down the more-fancied St Andrew Technical (STATHS), who have been the surprise package of the competition so far.

Camperdown and STATHS face off in the first game of a double-header, which starts at 1:00 p.m., with Calabar taking on Excelsior in the second game at 3:00 p.m.

STATHS upstaged defending champions Jamaica College, to claim top spot in Group B, and the team has improved technically and grown in confidence since the start of the competition.

Nevertheless, Bender is confident that his team can come out victorious in the two-legged affair, starting with a win today.

"They (STATHS) have done extremely well. They probably surprised a lot of people, but they didn't surprise me because I knew of some of the quality they possess. So we have to prepare to play them and try to get the result as it's a two-way game," he said.

"We are not approaching it as if it is one leg. We will approach it meticulously, and hopefully, we get the result we desire. We want to win the first leg that's our objective and we are confident in our ability," he continued.

Bender believes that the two extra days rest that STATHS have under their belt is a plus, but he believes that his battle-hardened team will be ready, despite losing their previous match.

"They (STATHS) last played over a week ago, so they will be more rested. But this is what we trained for. Now is the time you need maximum effort from the team. We know what is needed to recover and play good enough to win, and if we play to our ability, I have no doubt we can win the game," he said.

"STATHS is very big and strong at the back and they have a very good goalkeeper, who is doing well. But if we can put two good halves together, we will give them a good run.

We are under no pressure because we know how to lose and how to rebound from losing. So we have a lot of respect for our opponent, but it's a knockout, and it's the team that prepares itself best," he said.

Camperdown will look to Jeovanni Laing, Roberto Salmon and Shaquein Bradford, while, STATHS' hopes will rest on goalkeeper and captain Jaydean White, along with Jevaugny Johnson, Oneil Hayden, and Shamair Gayle.