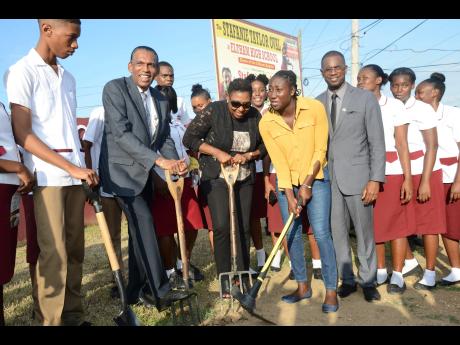 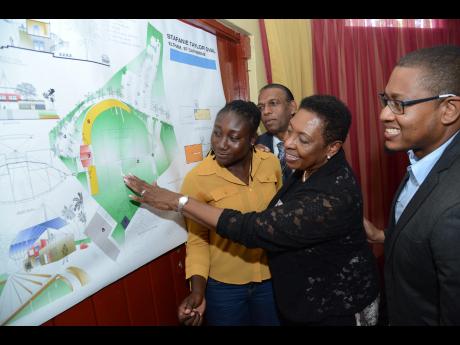 Rudolph Brown
Olivia Grange (second right), minister of sports; Stafanie Taylor (left); Billy Heaven (second left), president of the Jamaica Cricket Association; and Minister of State Floyd Green looks at the drawing of the Stafanie Taylor Oval, which will be built at the Eltham High School.
1
2

Minister of Sport Olivia Grange took the Inter Secondary Schools Sports Association (ISSA) to task on its failure to provide a proper explanation for its decision to bar female Eltham High School student Rashardo Williams, from playing in the boys' Under-19 ISSA-GraceKennedy Shield cricket competition.

Grange was speaking at the Spanish Town-based school yesterday during a ceremony to mark for the naming of the institution's cricket field in honour of West Indies Womens star Stafanie Taylor, who attended the institution.

She said that despite ISSA saying it was protecting the player from injuries, she is not comfortable with that explanation, noting that if Taylor was prevented, she would not have achieved her current success.

Meanwhile, Grange said that Taylor had made Jamaica, the region, and the world, proud and that it was great that her alma mater's oval would be named in her honour as a sign of her excellence.

Taylor was thrilled with the acknowledgement, noting that she did not expect such a recognition.

"Not in my wildest dreams did I think that I would be having the oval named after me. I am thankful and honoured and I am very thankful to my teachers and well-wishers who believed in me," Taylor said.

Meanwhile, West Indies Players Association (WIPA) President Wavell Hinds said that while there needs to be gender parity in the game, WIPA has helped to improve the remuneration of female cricketers and will continue to assist in this endeavour.

"When we intervened, women cricketers were being paid US$10 per day at the regional level and are now being paid US$125 per regional Twenty20 match and $167 for each regional One-Day match. He also added that females are being paid between US$12,000 and US$30,000 annually for West Indies retainer contracts," Hinds said.

"We are putting several competitions together to get more out of cricket and to make it a level playing field for men and women alike," Heaven said.

The function was well attended with officials, administrators, students, family members, friends, as well as scores of persons, who turned up to show their support to the Gordon Pen-raised Taylor.

Taylor, who made her debut at age 17, is the captain of the Windies Women's team and is a leading female cricketer in the world. She played a crucial role as the regional team won the 2016 World Twenty20, where she was named MVP.