Gearing up! - Williams positive about Commonwealth Games preparation in Kingston 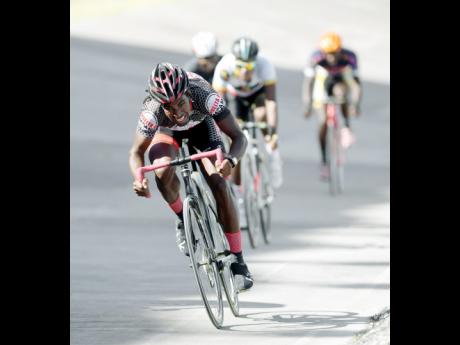 Jamaica's 2018 Commonwealth Games cycling representative Oshane Williams says that moving to Kingston for the last two months of preparation for the Commonwealth Games will quicken his progress and put him in a better position to make a big mark on the April 4 - 15 games.

Williams was in fine form as he took the feature Elite 1&2 Invitational event at the Jamaica Cycling Federation Development Meet One at the National stadium yesterday, beating former junior champion Brandon Reid into second and Andrew Ramsay into third.

It was relatively a Sunday stroll for Williams, who lapped the majority of the field on his way to a convincing victory. "It was never easy. You cannot underestimate anyone. But it was a pretty good race, and I enjoyed it. A lot of riders are in the event, so you want to get rid of the crowd early, and that I did because you don't really want to get bundled up and cause a crash and drop out. But I tried my best. I always give my all," he said.

After watching the 23-year-old's impressive display, national coach Carlton Simmonds believes that he is in good shape and has a solid foundation to build on.

"Coming into a local event, you expect nothing but the best. He is getting more serious and more focused. We have to get his endurance up. We have two months to prepare, and we want to get his strength and endurance up so we can get his speed up," he said.

Williams said that the race was a test run, but with the Games drawing closer, the association thought it was best to bring the Montegonian to the capital, where his preparation could be given more attention.

"This was a test run to see what I have and how far I am," Williams declared. "I need a lot more work, a lot more mileage, and I am looking forward to doing that this week. This is the biggest race I ever participated in internationally, so I will try to get as much experience as I can there."

The move from the Second City to Kingston has been well received by the young rider. "Coach has the (training) motorcycle, so that will get me up to speed more quickly than when training by myself in Montego Bay. So it (moving to Kingston) will boost my speed and get me up to standard very quickly.

"Two months is a lot of time to prepare. I need mileage, I need speed, and I know coach can get me up to standard. I will do my best and try to put Jamaica on the map as a cycling country," he said.

Simmonds also expects the Kingston move to bear positive results. "It's good to have him in Kingston. He can now get his head together and start focusing in a serious way," he added.