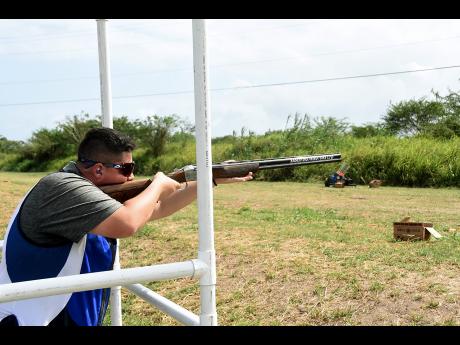 Joseph Pinchin on his way to winning ther NCB Capital Market Clay Shooting championship at Woodleigh in Clarendon on Sunday.

In his first local clay shooting tournament, Joseph Pinchin recorded a remarkable 96 from 100 birds to claim the 2018 NCB Capital Market Clay sporting championship at the Woodleigh Sports Complex in Clarendon on Sunday. The 17-year-old California resident upstaged a quality field, beating Ian Banks, who had a score of 92, into second place.

The young shooter told The Gleaner that although he did not go out with much expectation, he went into the competition full of confidence.

"I just wanted to enjoy a new environment, do well and have fun. I went on the course with confidence.

"Winning is something you think about after. I just went on the course to enjoy it and have a very good time," he said.

Pinchin, who has won numerous titles in California, said the course had a good mixture of medium and hard targets. He said he thought he performed very well and was pleased with his numbers.

"It was very good. I really enjoyed being out there. The wind was pretty difficult, messing with the targets and how they move, but it feels great to win a tournament here. I never thought it would be, so it feels really good," he said.

With the confidence gained from winning the NCB Capital Markets tournament, Pinchin is now eyeing the Florida State Championship and is looking to approach it with the same level of confidence he had for this tournament.

He was also especially grateful to the Jamaica Skeet Club, NCB and Leighton Sasso, who loaned him the gun he used to conquer local soil, along with parents Jose and Tracey Pinchin.

"They take me everywhere. Without them I wouldn't be able to do any of this," he said of his parents.