'Knowing when to move on' - Weir explains Rugby Sevens decision 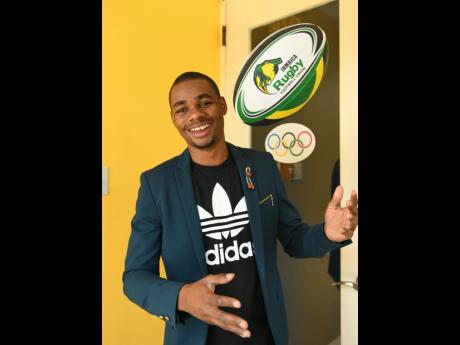 Ricardo Makyn
Warren Weir at the announcement of Jamaica's Rugby Sevens team to the Central American and Caribbean Games at the Jamaica Olympic Association headquarters yesterday.

It may come a surprise to many, it might seem ludicrous even, but medal-winning Olympic and World Championships sprinter Warren Weir is determined to make a name for himself as a - wait for it - rugby player.

Weir shot to international fame as the door closer in a memorable Jamaican sweep of the men's 200m at the London Olympic Games in 2012 and followed that up with a silver medal at the 2013 World Championships.

He would also record his fastest time that same year, a nifty 19.78 seconds, but things have been heading mostly downhill on the track since then for the 28-year-old, who now sees his unlikely new sport as another opportunity to represent his country on the international stage.

Weir, who was officially named yesterday to Jamaica's Rugby Sevens team, which will compete at the Central American and Caribbean (CAC) Games in Barranquilla, Colombia, from July 19 to August 3, admits that his time is almost up in athletics, but says he plans to return to the sport next season.

Until then, he hopes to make the first steps towards becoming a bona fide dual sport athlete, with a professional career in rugby high on his list of short- to medium-term ambitions.

"I am 28 now and you can see the youngsters running really fast. I don't plan to be here all the days of my life trying to compete with these youngsters. I have somewhat created a legacy and I don't intend to ruin that by keep getting beaten and losing. It's important to know when to move on and to help the youngsters to transition into a state where I was," Weir told The Gleaner. "It's not about quitting; it's about knowing when to move on.

"I joke around with my friends and say that after athletics, we are going to live in Australia, or South Africa, or New Zealand, or one of those countries that have strong professional leagues. We laugh about it every day, but more and more, it will be a reality because track and field won't last forever for me, and Jamaica is trying to qualify in rugby for the Tokyo Olympics. I would love to be that Jamaican who went to two Olympic Games for two different sports. That would be a major achievement," Weir further explained.

He would not be the first sprinter to try his hand - and feet - at rugby, or vice versa for that matter. American Rugby Sevens star Carlin Isles, regarded as the fastest man in rugby, is said to be close to 10.00 seconds flat over 100m and ran a record 6.68 seconds in the 60m, while in college.

"The opportunity came while I was in Australia at the Commonwealth Games. I met with the rugby coach, but even before they approached me, I was looking at some of their training sessions and one of the officials asked me if I would be interested, and I said not at the moment because I am still in track and field, but the opportunity came again when I got injured," Weir said.

"I said to myself, 'Why not try to learn a sport in the off season?' So I went to a few training sessions, learnt the sport and liked the sport. They want me to play as a winger, so it's a lot of running and they've decided to carry me to the CAC Games to learn the sport some more, and I took the opportunity, seeing that I'm in off season for track and field," he continued.

It's left to be seen how much of an opportunity he will get in Colombia, what type of condition he is really in, or what type of ability he will actually show in rugby, but his intentions are clear.

"It's a very good squad, but they are lacking some speed. I am just here to show them ways of enhancing their speed and overall just helping them. Rugby is not a big sport in Jamaica, but we are trying to get it more popular. We all love to wear our national colours, and if there's an opportunity to wear my national colours in a different sport, I will definitely take that opportunity," said Weir, who shared that in addition to his training, he has been doing hours of video research.