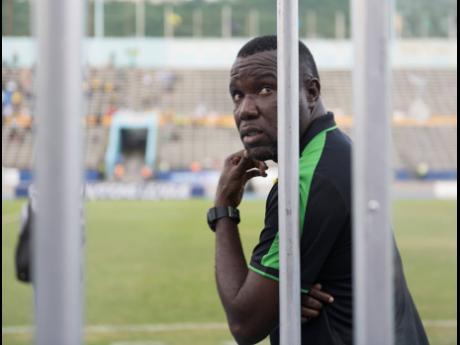 Reggae Boyz head coach Theodore ‘Tappa’ Whitmore said he was disappointed with the Reggae Boyz’s performance despite their 2-0 win over Aruba in their Concacaf Nations League match at the National Stadium yesterday.

Devon Williams in the 14th and Shamar Nicholson in 89th minute were the goalscorers for the Reggae Boyz.

“It is just 2-0, and I am not pleased with the performance, but it is three points,” said Whitmore, who pointed to complacency.

“I think there was a lot of complacency among the players, and I think it had to do with the opponent, but we just have to dust ourselves off and come again for the next game,” he said.

The Reggae Boyz dominated the first half of the contest as they outplayed the Arubans in all departments. However, despite their dominance, the hosts only had one goal to show for their possessional superiority.

Williams, who plies his trade for Louisville FC in the United Soccer League (USL) in the United States, fired the Reggae Boyz in front when he arrived at the near post to finish off a left-sided cross from Damion Lowe past goalkeeper Eric Abdul.

Nicholson, who missed from the penalty for the Boyz in the 77th minute, came close to doubling the Reggae Boyz’s lead a few minutes later, but his close-range effort from 10 yards went high over the crossbar.

Striker Dever Orgil, who was deployed as a left winger by Whitmore, also squandered a number of clear-cut chances for the Jamaicans, who failed to increase their advantage in the first period.

In fact, even with the Arubans sitting deep in their own half and allowing the Jamaicans to control possession of the ball, the home side failed to hit the target.

Midfielder Alex Marshall, who was the only local-based player in the starting line-up for the Reggae Boyz, came close to scoring for the home side, but his weak, left-footed effort from 10 yards went straight into the hands of Abdul.

However, the Arubans, who are ranked 195 in the world, started the second half confidently as substitute Edward Clarrissa came close to giving the visitors the equaliser.

Clarrissa, who entered the match at the start of the second period, collected a defence-splitting pass out of the midfield from Gregor Breinburg, but with custodian Andre Blake at his mercy, his powerful shot deflected behind for a corner off defender Adrian Mariappa.

The Reggae Boyz quickly regrouped and stepped up the tempo of the game, and they were rewarded with a penalty in the 77th minute when substitute Javon East was brought down inside the 18-yards box. Nicholson, however, failed to convert from the spot as his powerful shot went high over the crossbar.

However, Nicholas redeemed himself 13 minutes later when he netted the Reggae Boyz’s second goal of the match. The former Boys’ Town striker dribbled around three defenders before firing home from point-blank range past Abdul.

Clarendon College’s schoolboy Lamar Walker, who was brought on by Whitmore for Marshall in the 65th minute, added a lot of pace to the Reggae Boyz’s attack, tormenting the Aruban defenders with his clever off-the-ball movements and swift dribbling skills.