Waite: Keep up your club form 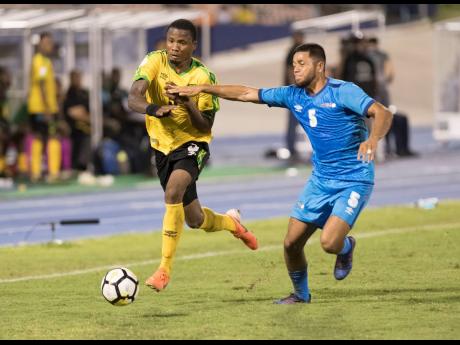 Gladstone Taylor
Jamaica’s Alvas Powell (left) on the offensive against Aruba’s Noah Harms in their Concacaf Nations League B game at the National Stadium in Kingston, Jamaica, on Saturday, October 12, 2019.

Jamaica’s 2-0 win over Aruba in the Concacaf Nations League B last Saturday maintained the team’s strong position in Group B, but Theodore Whitmore was far from pleased with the performance, criticising the complacency that was shown.

What followed in their return game in Curaçao on Tuesday was a much better showing as they rolled to a comprehensive 6-0 win. The victory was highlighted by no less than four players registering their first senior goal for the Reggae Boyz. Assistant coach Jerome Waite praised the performance of goal debutants Chavany Willis, Maalique Foster, Lamar Walker, and Junior Flemmings, but says that future call-ups for the quartet, as with all selected players, will depend on their performance with their respective clubs. He is encouraging them to continue their good club form so that they will be able to make many more contributions to be part of future call-ups.

“They understand the importance of being on top in their clubs, because at the end of the day when we get in touch with their clubs to find out what those players are doing, you have to be consistent,” Waite told The Gleaner. “And it’s not only the 23 players who made [this] squad. It’s a pool of players. So you can at all times find other players who will make a difference at any point in time when you call upon them. It’s a situation where those players have to be consistent and continue to get a lot of playing time.

“You always want to have your strikers continue to do well and score goals. But what was good is that those players scoring for the first time, especially the youngster Lamar Walker, and he’s one of the talents for the future. It’s good to know that these players were given the opportunity and really came out and did well.”

The win cemented the Reggae Boyz’s place atop Group B with 12 points, with two matches left. Waite credits Tuesday’s win to improvements made in the attacking phase of the game.

“The camaraderie, the cohesiveness, the moving into the final third, the connections to make sure that they get the ball in the back of the net. You could see a big difference in that aspect,” he said.

Waite was pleased with the way that the players managed to perform and seize their opportunity in the absence of Bobby Reid and Leon Bailey, who did not feature in this international window due to injury, and stresses the importance of finishing the job of promotion to League A next month in games against Antigua and Barbuda and Guyana. Promotion also means qualification for the next Concacaf Gold Cup tournament in 2021.

“It’s very important because it’s about getting three points and continuing to have clean sheets and score goals,” he said. “We will always want the players to continue to do well, not only for themselves, but for Jamaica.”