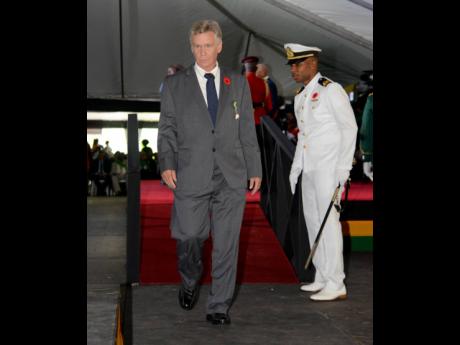 Kenyon Hemans
Horse racing commentator Brian Paul ‘Spuddy’ Rickman, moments after receiving his Order of Distinction officer class award for his contribution to nation building in the field of sports at the National Honours and Awards ceremony at Kings House, St Andrew yesterday.

It is customary to find Brian ‘Spuddy’ Rickman commentating on Heroes Day racing from Caymanas Park, as he has done for over 30 years. It would take something serious or massive to get him away from the track. So count receiving a national award as a pretty good excuse to miss work.

The legendary horse racing commentator was among an elite group of persons honoured for their contribution to sport at the National Honours and Awards ceremony on the lawns of Kings House yesterday. Rickman, whose voice is synonymous with horse racing, was awarded with the Order of Distinction officer class, the country’s sixth highest honour, with Olympian Nelson ‘Chris’ Stokes and MVP Track Club president Bruce James. For someone who initially started with little knowledge of the sport, he says he is humbled that he was recognised in this fashion.

“It’s not something that you expect, so when it comes, it comes as a shock because there are so many people that have probably done things better than me that are not recognised. So when you get it you have to feel really good about it and really honoured about it,” Rickman said after the ceremony.

Rickman credits Christopher Armond for giving him the opportunity to venture into an area that was foreign to him. It was a cousin of Armond’s who set up the meeting.

“I knew his cousin and he spoke to him because I needed to make some extra money and he said would you like to work with Chris?” Rickman said. “[He said] ‘Let me talk to Chris.’ And he went and spoke to him and said come in and try.

Rickman’s voice has become familiar to racing enthusiasts who would turn on their radios and televisions, mostly only Wednesdays and Saturdays for coverage of races. And even at 63 years old, he feels that he has no problems continuing to bring quality commentary to listeners.

“I’m not so old for my age,” he joked. “I’m not broken down or destroyed. You keep on going. I still have my voice and my eyesight is pretty good.”

But he was not complaining about getting a bit of relief to accept his award and bask in the work that he has done.