STGC powers back against Mona 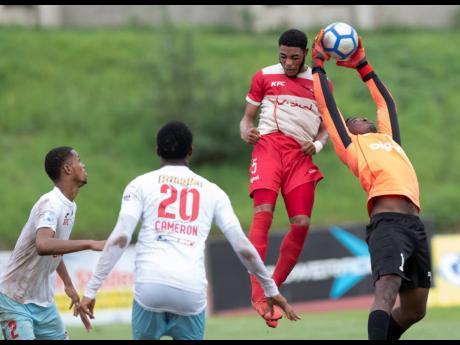 The ISSA/Digicel Manning Cup second round between Mona High and St George’s College (STGC) was much closer than it was last year. But STGC came back from a goal down to win 2-1 in the first leg of their two-game tie at Stadium East yesterday.

Jamone Shepherd and captain Nathaniel Campbell powered the 2018 finalists towards victory after Dellneil Pinnock gave Mona, the designated home team, the lead in the first half. Last year, Mona plunged to a 4-1 defeat in the first leg en route to a 7-1 aggregate defeat and were determined to make amends. George’s did have early chances on goal, but it was Mona who managed to test goalkeeper Orville Smikle early after Devar Whittingham latched on to a pass from Romario Harris and his shot was palmed away. The home team made things uncomfortable for St George’s and managed to find the breakthrough in the 19th minute when Pinnock fired home from close range after the George’s defence failed to clear the ball from a free kick.

George’s were then forced to push for the equaliser. They came close minutes afterwards when they forced Mona goalkeeper Jabez Cleghorn into a save. Shepherd tested Cleghorn with two shots, but they were hit straight at him. Shepherd finally broke through in the 35th minute when his effort from outside the area stormed by Cleghorn to restore parity.

St George’s looked the better team after halftime, finding their rhythm and getting more opportunities to attack. Mona were hanging on to the result with few attempts although substitute Jonathan Gordon came on and provided a spark on the right-hand side. But the resistance was broken in the 76th minute when Campbell managed to place his header forward in the box over Cleghorn and a Mona defender into the net for the winner and to take a one-goal advantage into tomorrow’s decisive second leg.

STGC assistant coach Marcel Gayle was pleased with the result although he acknowledged they were not playing their best.

“We weren’t playing at our best, but yet still we came out on top,” he said. “So we can take heart from that. But I think we made Mona play a little bit too long today. We didn’t close them down at times. But it’s something that we have to go back to the drawing board and come again for Saturday.

Mona head coach Alexander Morgan said that his team had the chance to hold George’s to a draw but noticed the difference in approach from his players from last year’s meeting.

“There are a lot of positives we can take,” he said. “I think we played better than St George’s and I think we could have taken a draw from this game. Come Saturday, I think we know what we can do to win the game. The players are more experienced and they are not frightened of the big names.”

Excelsior have a commanding lead in their second round tie, defeating Jonathan Grant 3-0 in the second-game of the double header yesterday.