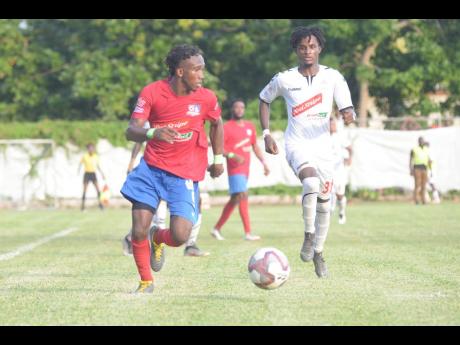 Dunbeholden gave themselves much-needed breathing room in the Red Stripe Premier League (RSPL) table with a 1-0 win over bottom club University of the West Indies (UWI) FC in their game at the Royal Lakes Sports Complex yesterday.

Dean-Andre Thomas’ 52nd-minute strike was all that was needed for victory in the end as the result elevated the St Catherine-based team to eighth place after starting the day one point above the drop zone.

It was the first win for Dunbeholden in more than a month, and it could not have come at a better time, according to assistant coach Andrew Fraser.

“This is a very important win for us because we have been struggling the past games, but we finally got three points,” he said after the game.

Fraser credits the return to form of his goalscorer Thomas, who tallied his first goal since their last win against Vere United on September 22. But he stresses that other players have to step up as well. “It’s good (Thomas scored), but yet still, we need other players to be scoring,” he said.

UWI slumped to their fifth defeat of the season and are rooted to bottom of the table. Head coach Andrew Peart did not hide his frustrations, especially on how the winner was conceded. “It was in a moment where the opponents weren’t in the game,” he said. “We were looking to consolidate our dominance and try to score a goal then we give up a goal out of nowhere. You can’t coach these things.”

There were warning signs from Dunbeholden in the first half as Thomas had a 17th-minute effort go over the bar after being put through by a great pass.

Nickoy Christian had his free kick saved by UWI goalkeeper Amal Knight in the 28th minute, and Andre McFarlane managed to turn his defender round and find space for the shot in first-half stoppage time, but it was right at Knight. UWI had their first shot of the game as the first half ended when Damano Solomon’s free kick went wide.

UWI had a great chance to take the lead in the 51st minute through Javoy Belnavis but were foiled by Dunbeholden goalkeeper Giovanni Smith. Sixty seconds later, McFarlane managed to find Thomas, and his low drive found the net, giving Dunbeholden the lead.

From that point, the home side took control. They had a goal from Christian ruled offside three minutes after, and Demario Phillips had a header, which Knight held.

Seven minutes from the end, Dunbeholden had a chance to add an insurance goal when referee Kevin Morrison awarded a penalty after Christian was fouled in the box. However, McFarlane’s spot kick was saved by Knight.