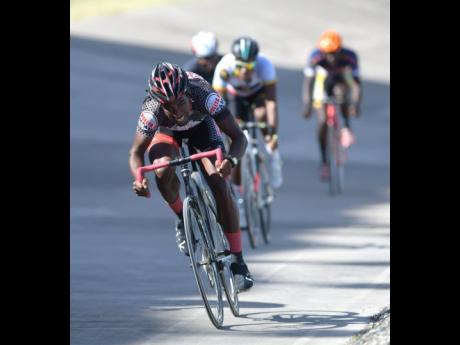 Ricardo Makyn
Oshane Williams wins the elite 1 and 2 tempo race at the Jamaica Cycling development meet one, held at the National Stadium in February 2018.

Bailey defeated challenger Jorge Blas Diaz, president of the Dominican Republic Cycling Federation, at the CCC’s General Assembly at the end of a heated and polarised meeting at the Hotel Comodoro here on Saturday night.

Simmonds took part in the assembly and the voting process on behalf of JCF President Joylene Griffiths, who did not make the trip for what was said to be personal reasons.

“For me, it’s okay in terms of how it turned out,” he told The Gleaner. “The people who have committed themselves are people who want to serve, which I think is the biggest part of it. It can’t be about a personal agenda. It has to be a concerted effort by people who present themselves to want to work, because it’s a lot of work. It’s going to take commitment from all and sundry to help move and develop the sport of cycling in our region.”

The assembly started with two challengers to Bailey: Blas Diaz and Haiti Cycling Federation (HCF) Vice-President Marjorie Guillaume. Both challengers cited a lack of transparency on the part of Bailey in his previous terms as CCC president, and a lack of growth for regional cycling under his leadership as the main reasons for their candidature.

But the legitimacy of Guillaume’s candidacy was questioned, with Bailey first saying she was not a registered member of the HCF. After Guillaume’s position with the HCF was explained, Bailey then suggested that she held positions in two unions simultaneously, ­saying that she was also a member of the French Cycling Federation. Guillaume was, however, resolute and defended her eligibility before the executive eventually removed her name as a contender. She argued that Bailey was actually the ineligible candidate as he had unpaid membership dues and submitted his registration 24 hours after the deadline. She said this meant that he, as president, violated the rules outlined in the CCC’s constitution.

Guillaume then tried to get the support of her husband, Cedric, saying that Article 28 of the constitution allowed him access to the proceedings. This article says, “Unless otherwise decided by the Congress, the Congresses of the CCC shall be public.”

Guillaume took her husband into the meeting but he was roughed up by guards, who forcibly removed him from the room.

There was further controversy as no tally of votes was given, with just an announcement that the winner was Bailey. Two participants in the voting process said they believe the decision was 14-11 in Bailey’s favour but were unsure. He, too, told The Gleaner he was unsure of the tally but thought it ended 13-11 in his favour.

Robert Farrier, a departing vice-president of the CCC, and former president of the Trinidad and Tobago Cycling Federation, was visibly angered by the outcome of the election.

“For me, this whole CCC shows lack of transparency in all ways possible,” he said. “From not abiding by the constitution that we all voted in to govern the body.

“It’s crazy, just crazy to see Caribbean people not uniting and being a force to reckon with in the world of cycling.”

During the congress, Farrier also voiced discontent at not being privy to decisions made by the executive body, which he is a part of.