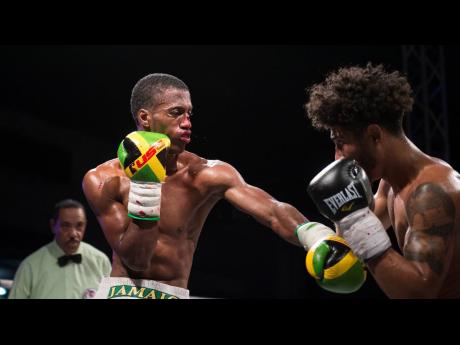 Gladstone Taylor
Toriano Nicholas (left) of Jamaica faces Carlos Dixon of the United States in the fifth bout at the Gloves Over Guns Fight Night held at the Ambassador Theatre in Trench Town, Kingston, on Saturday, July 13, 2019.

Undefeated heavyweight Vladimir Tereshkin of Russia hopes to score another victory to add to his record when he takes on Dominica Republic’s Francisco Silvens in the main event of a four match fight card at Sabina Park tonight at 7 p.m.

“The aim of these promoters is to make Jamaica one of the boxing capitals of the world, that people want to bring shows here and the success of a card like this will mean a lot,” Brown told The Gleaner.

Brown says that bringing boxing back into the people’s focus has the potential to engage corporate sponsors to come on board.

“What we are trying to do now is open the door, get boxing back into the public’s eye, rebuild enthusiasm and this also will tell sponsors that here is a sport that you can invest in because sponsorship is the lifeblood of any sport. And we want to encourage sponsors to come into boxing and show them that it is a viable proposition for their product.”

He says that the success of the event will inspire local boxers to continue moving up the ranks towards top level bouts.

“When our local boxers see professional boxing coming back as a big event in Jamaica, they will be more inspired to get into the gym, keep themselves fit that they can be on the under-card initially, and then down the road to the main bout, contenders like the Nicholas Walters and the Mike McCallums, and the Bunny Grants of the past,” he said.

The under card will feature boxers from the Gloves Over Guns programme as well as a women’s lightweight bout between female boxers Lisa Fraser and Britney McFarlane.