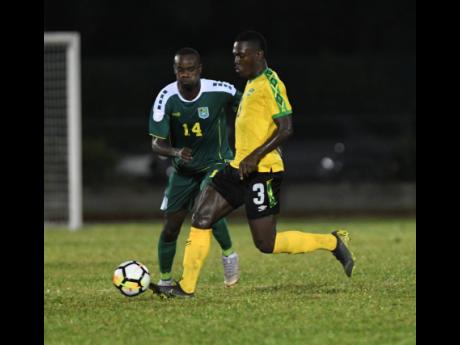 Ricardo Makyn
Jamaica’s Kevaughn Isaacs (right) is challenged by Guyana’s Daniel Wilson during their final Group C game in League B of the Concacaf Nations League at the Montego Bay Sports Complex on Monday night.

National senior men’s football team head coach Theodore Whitmore is calling for more hunger and ambition from his players. Whitmore believes that they should see Jamaica’s top-50 FIFA World Ranking as an opportunity to play in Europe’s top leagues and raise their standard.

Whitmore was speaking after a rotated Reggae Boyz team drew 1-1 with Guyana in their last game in Group C, League B, of the Concacaf Nations League at the Montego Bay Sports Complex on Monday.

For overseas players to gain a work permit to play in the English Premier League, their national teams must be ranked in the top 50 in the world consistently over a three-year period, and they must feature in at least 75 per cent of that international team’s matches.

Whitmore said that a lack of ambition among local players is a major concern for him as he looks towards the 2021 Concacaf Gold Cup and the structure of the final round of World Cup qualifiers, where the top-six ranked teams in the confederation as of June 2020 will automatically be placed.

“We need our players to be in the higher leagues playing in a more competitive setting,” Whitmore said. “Being in the top 50 gives them the opportunity to go to Europe and we have provided them with an opportunity. However, I think our players are easily comfortable playing MLS (Major League Soccer) and USL (United Soccer League), which is overseas (United States), yes, but where overseas?

“I don’t know how much of them take where we are now (45th ranked) as an opportunity for them to go to Europe. It is up to them as we can only provide them with the opportunity, so it’s down to how well they grasp it,” he added.

Whitmore said that he is not particularly worried about the result on Monday as it will not have a significant effect on Jamaica’s ranking in Concacaf, which is now third.

“For me, as much as the ranking is important, I’m not paying it too much mind,” he said. “My focus is us getting in that last six or hexagonal round come next year. When you really look at the points standings and how it’s really set up, I don’t think that anybody will surpass us in the top six.”