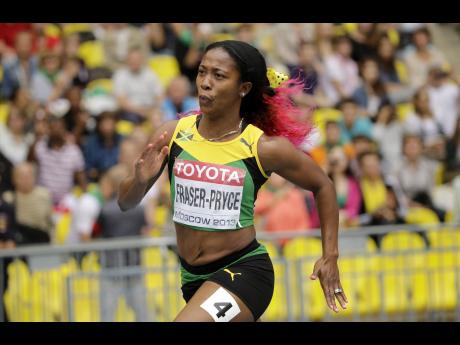 Jamaican sprinting queen Shelly-Ann Fraser-Pryce missed out on the World Athletics Female Athlete of the Year Award, with 400m hurdles world record holder Dalilah Muhammad (USA), given the nod at a ceremony in Monaco on Saturday.

Fraser-Pryce, the world 100m champion and joint fastest woman in the world for 2019, was looking to win her second World Female Athlete of the Year award, after her triumph in 2013.

She was interviewed live during the ceremony from her home in Kingston, as she gave an update on her preparations for next year's Olympic Games in Tokyo, Japan and spoke to the impact of her success after coming back from child birth.

Only one other Jamaica woman has won the Athlete of the Year award, with Merlene Ottey claiming the top prize in 1990.

The Male Athlete of the Year award went to Kenya's Eliud Kipchoge, who won the London Marathon in a course record of 2:02:37 and is the first person to complete a marathon in under two hours after clocking 1:59:40.2 in Vienna.

Meanwhile, another Jamaican Brittany Anderson, who broke the world under-20 100m hurdles record, was presented with a plaque for her special achievement.

Anderson, who won gold in the event at the 2017 World Under-18 Championships, twice broke the record at the Motonet Grand Prix in Joensuu, Finland on July 24.

She was also nominated for the Rising Star of the Year Award, which was won by Ukraine's Yaroslava Mahuchikh, who broke the world U20 record in the high jump with 2.04m and was a silver medallist at the IAAF World Athletics Championships Doha 2019. She is also the European U20 champion.