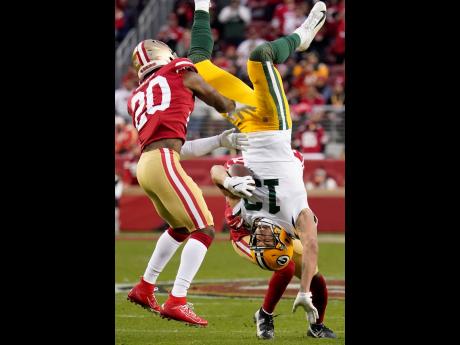 Patrick Mahomes tip-toed down the sideline for a game-turning touchdown, added three TD passes, and the Kansas City Chiefs made their first Super Bowl in a half-century by beating the Tennessee Titans 35-24 on Sunday for the AFC championship.

In two weeks in Miami, the Chiefs will play San Francisco for the title.

Mahomes did his usual superb job passing, but it was his 27-yard tap dance down the left sideline late in the first half that gave the Chiefs their first lead. From there, they outran the run-oriented Titans and star back Derrick Henry.

Adding to the joy of the achievement, coach Andy Reid and owner Clark Hunt accepted the Lamar Hunt Trophy – named after his father – emblematic of the AFC title.

Next up: chasing the Vince Lombardi Trophy

As they had done in their past three “elimination’’ games, the sixth-seeded Titans (11-8) got started quickly. The difference at Arrowhead as opposed to Houston, New England, and Baltimore was that the Chiefs had Mahomes, Tyreek Hill, Sammy Watkins, and Damien Williams on offence, and a vastly upgraded defence from when they lost in last year’s AFC title game.

A week after they overcame a 24-0 deficit against Houston, the Chiefs had to rally again.

Down 10-0 and 17-7, Kansas City didn’t flinch, building a 35-17 lead, while controlling the clock with a strong ground game. Naturally, Mahomes complemented that with sharp passing, spreading the ball on short and deep throws. The dagger came with a 60-yard completion to Watkins for the Chiefs’ 28th straight point midway in the final period.

Mahomes thrust both arms in the air as the crowd sang I Wanna Dance With Somebody.

The 49ers (15-3) advanced to their first Super Bowl in seven years and will play the Kansas City Chiefs in two weeks in Miami for the championship.

It’s been a remarkable turnaround for a team that won just 10 games in the first two seasons under coach Kyle Shanahan and general manager John Lynch and had the No. 2 pick in the most recent draft.